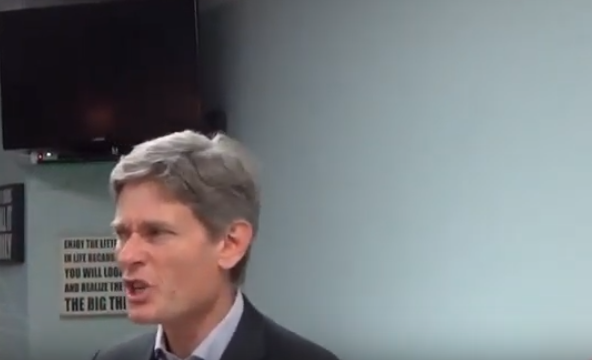 FRANKFORT, K.Y. – Tom Malinowski is regular a target for New Jersey Republicans, but today it’s the Kentucky GOP that’s had about enough of Central Jersey’s snarky (and in this case downright nasty) freshman Democrat.

“There’s nothing funny about a member of Congress threatening to withhold vital supplies from Kentuckians during a deadly outbreak,” said Republican Party of Kentucky spokesman Mike Lonergan on Friday. “At a time when families and communities across the country are suffering, people are coming together to fight the coronavirus. This Democrat congressman’s threats need and deserve to be condemned. As senior members of Malinowski’s party, and holding or seeking high office in Kentucky, Andy Beshear, Amy McGrath and John Yarmuth need to speak out against their fellow Democrat’s disgusting rhetoric.”

Malinowski made the offensive comments during a recent Zoom event with constituents.

“Fun fact about Somerset County: we make 100 percent of the national supply of Lysol disinfectant,” Malinowski (D, NJ-07) quipped. “I’ve thought about using with Mitch McConnell, like, ‘Hey, we’re going to hold up the Lysol for Kentucky until you pass her” bill.

“I see some thumbs up, but that’s a fantasy that I don’t think, it’s not going to work that way,” Malinowski continued.