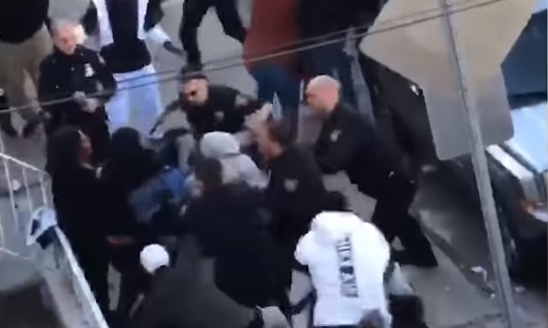 What resulted was either (1) the police handling an objectively difficult decision by the book or (2) an example of “police brutality” involving batons and pepper spray. As that familiar debate gets underway, a larger question looms: was the entire situation catalyzed, or at least exacerbated, by the current social distancing regime?

Many social media users viewing and sharing uploaded video of the brawl insisted the clash was precipatated by social distancing enforcement.

At his press conference, Shea said backup was summoned only after a civilian attempted to grab an officer’s duty belt. Officers utilize a higher level of force when their weapon is threatened. Six officers initially attempted to disperse the 100-per crowd after 911 received a call for a 20-person street fight, Shea explained.

Six individuals were ultimately arrested; the Hudson County prosecutor is reportedly investigating as is police internal affairs. None of the officers involved have been removed from active duty: