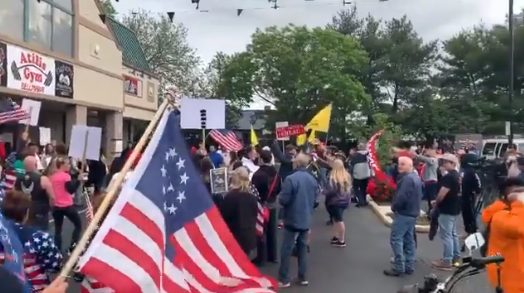 BELLMAWR, N.J. – Media, police, and a crowd of over a hundred descended on a Camden County suburban gym on Monday morning after the owners promised to reopen in defiance of Governor Murphy’s stay at home order.

The doors were unlocked at 8 a.m. The management of Atilis Gym is reportedly limiting capacity at the private facility to 44 members at a time; they’ve also spaced out workout machines/stations and have their staff performing temperature checks before members can enter the facility. The gym’s story went ‘viral’ last week after one of the owners was a guest of Fox News’s Tucker Carlson.

At least one protester has a live feed up on Facebook.

Then a public works crew arrived. According to Fox29’s Steve Keeley, law enforcement initially attempted to stymie access to the gym. Then, some time later according to a Save Jersey source, the police announced (paraphrasing), “everyone here was technically in violation of the governors order and on that note, have a great day” and left the strip mall…

More than 200 people have gathered outside Atilis Gym in Bellmawr, NJ in support of the owner’s decision to defy the governor’s orders and reopen the gym. It is set to open at 8 a.m. pic.twitter.com/f2n7RQRnO0

Update:Just now a local Bellmawr Police Lieutenant walked up to front door& owner of Atilis Gym&said “You’re all in violation of Governor’s executive order. That being said stay safe&have a nice day.” And walked away&crowd of supporters let out a loud cheer ⁦@FOX29philly⁩ pic.twitter.com/M3XvbHfvV0