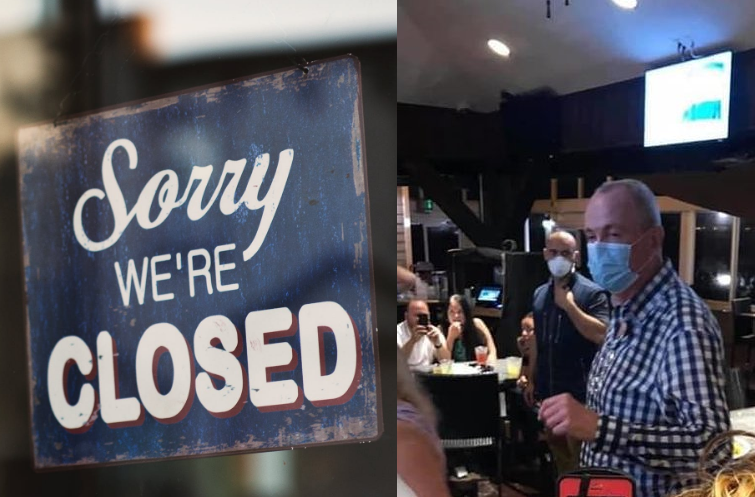 BAYVILLE, N.J. – It’s only the latest but arguably most egregious example of hypocrisy from Governor Phil Murphy during the ongoing COVID-19 “emergency.”

On Monday, word began circulating on social media that Governor Phil Murphy had allegedly dined indoors at Martel’s in Bayville over the weekend; MoreMonmouthMusings was first to report on it. Indoor dining wasn’t supposed to be permitted until July 2nd, so Murphy reported Satuday night activites would’ve once again violated his own order.

Note that I said “was.” Back to that in a minute.

The Administration subsequently claimed the Governor was inside only briefly and only on account of a rain storm and had, in fact, taken his meal with First Lady Tammy Murphy outside; the manager backed up this story to NJ 101.5, but at least one patron disagreed in a Twitter exchange with state Senator Declan O’Scanlon (R-13):

Wow. The hypocrisy is astounding! https://t.co/Vj4vSJPkvm

I was there. He ate inside, maybe because if the rain. But he only came out to the very crowded bar for pictures. The waitress told us he ate inside. If he ate outside I would have walked passed him twice n he would have been soaked. The only place out of the rain was there bar. pic.twitter.com/9EQoxtLRBg

There’s no “rain exception” to the Governor’s COVID-19 orders of which I’m aware.

You be the judge, Save Jerseyans…

Now, the last time Murphy got caught violating his own orders? Marching in BLM protest parades while simultaneously charging other New Jerseyans for protesting his policies? Murphy backed off and essentially legalized his own conduct.

The long-planned restart of indoor dining ahead of the Independence Day Weekend holiday – a much-needed boost for the Jersey Shore economy, advocates argue – is NOW OFF…

UPDATE: INDOOR DINING WILL NO LONGER RESUME ON THURSDAY.

We had planned to loosen restrictions this week. However, after #COVID19 spikes in other states driven by, in part, the return of indoor dining, we have decided to postpone indoor dining indefinitely.

This is real life, folks. Couldn’t make it up if we tried.