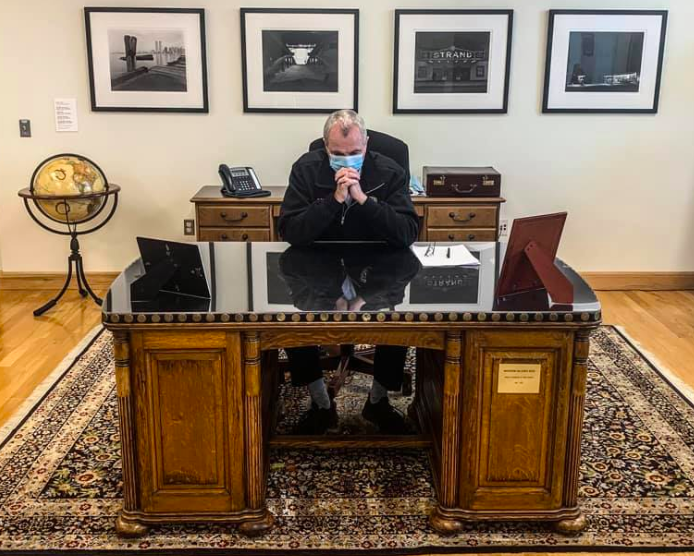 If we’re rating which U.S. President was the biggest racist piece of shit to ever darken the Oval Office’s door, Save Jerseyans? There’s little doubt that Woodrow Wilson would win the prize. Of course he also happens to be the only New Jerseyan elected president, a misfortune that routinely rears its ugly head on Princeton’s campus.

Another fun fact: Governor Phil Murphy – who prides himself on being woke no joke – is using Wilson’s desk. In a twisted bit of irony, the desk made an appearance in Murphy’s recent “8 minutes and 46 seconds” tribute to George Lloyd…

Nikita Biryukov, New Jersey Globe: Governor, so I only have one question for you. It’s pretty clear what your stance is on the Black Lives Matter movement, given your attendance at the protests and your words here and elsewhere. But I do want to ask, so a few days ago you tweeted out, when you were sitting, giving a moment of silence, you tweeted out a picture of yourself behind Woodrow Wilson’s desk. Now the former President has, let’s say a complicated history with racism, including there were some protests in 2016 while you were running for Governor to try to get the Woodrow Wilson School at Princeton renamed. So I’m just wondering why did you choose to pose behind that desk? And do you have any feelings on keeping that desk?

Governor Phil Murphy: I don’t have at my ready usually Woodrow Wilson talking points, so you’ll forgive me for not having been asked this question before. I didn’t pose behind the desk. That is my desk. That’s the Governor’s desk. So, but you’re right about his, I’ll be charitable, uneven history as it relates to race and Princeton University, of which he was the former president, has been, I think, very soulful and very reflective on that reality. It’s a good question. I don’t want you to think that I sought out a Woodrow Wilson desk though to pose behind. That’s the desk I sit behind every day, but it’s a very, very fair point to be raised. So, thank you. Sir. Go 49ers, apparently.

So yeah, Nikita got a very typical Murphy non-answer. The Governor didn’t come close to answering  his question. In a follow-up post, Nikita also noted that apparently the desk isn’t the default gubernatorial desk; someone must’ve selected it.

At a time when HBO is shelving Gone with the Wind and NASCAR is banning the Confederate flag, will Phil do the woke thing? And eighty-six Wilson’s desk? Or will he keep his hypocrisy streak going?