FYI: Making Phil Murphy sympathetic is a piss poor way to defeat him 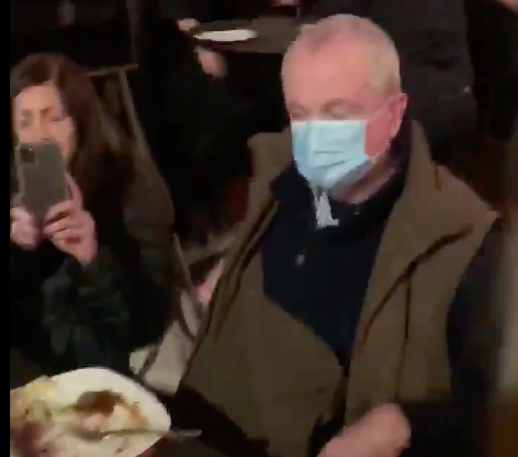 There’s a viral video making the rounds tonight on Twitter, Save Jerseyans, featuring Governor Phil Murphy dining out with his family at an unknown restaurant (presumably somewhere at the Jersey Shore – he lives in Monmouth County). From what we can tell? A woman confronted the governor, called him “a dick,” and then let fly some more creative profanity, too, before the confrontation ended.

Cringe worthy? Yeah. Murphy certainly deserves a verbal dressing down, no doubt, but there used to be some boundaries in our society. Cursing people out in front of their kids at a restaurant used to be over the line. Maybe not in 2020. The Left most definitely started it. Some on the right side of the spectrum understandably (if not excusably) believe the old rules not only no longer apply, but adhering to them plays into the Left’s hands.

Phil Murphy is destroying people’s lives. There are small businesses which survived start-up growing pains, economic recessions, and Hurricane Sandy only to succumb to this guy’s arbitrary lockdown restrictions. He calls dissenters “knuckleheads” and accuses them of casual disregard for human life. He voices little regard for the Constitution. He infringes upon the First Amendment but repeatedly violated his own orders. While he lectures us on downsizing Thanksgiving, we remember the thousands of dead long-term care residents who will never celebrate the holidays with their families again because of his decisions. There are a million reasons to hate him and want him out of office.

Those reasons are ALL the more reason not to play his game.

He wants you to not vote, so he imposes a remote election on the state and was glad when you decided to sit it out.

Democrats like Murphy don’t win when their residents prosper. They win when prosperous residents give up and move. He literally told you to “go down to Georgia” if you don’t like it. So you… oblige him, vote with your feet and move.

He wants you to behave like “a knucklehead” and drop F bombs in front of his kids at Sunday dinner – in full view of cell phone cameras – so that he can dismiss the opposition to his tyrannical policies as a group of unhinged nutjobs.

Chris Christie would’ve lost his shit and eaten the heckler alive. Murphy is a more disciplined politician. He sat there, took it, and won the exchange without saying a word.

Making Murphy sympathetic is a piss poor way to defeat him next year, folks.

Don’t let the monster make you monstrous. Be smart. Be good. Be better, because we are.