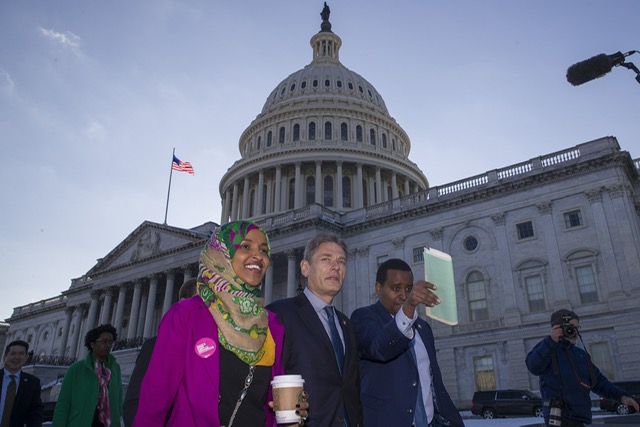 Twelve Democrats in the U.S. House issued a weak statement but it’s a statement nonetheless on Wednesday night asking Ilhan Omar to “clarify” her latest stupid comments. This time, she equated the United States and Israel to Hamas and the Taliban.

“We must have the same level of accountability and justice for all victims of crimes against humanity,” Omar, a notorious anti-Semite, tweeted on Monday. “We have seen unthinkable atrocities committed by the U.S., Hamas, Israel, Afghanistan, and the Taliban.”

Kim might be busy embellishing his resume. Malinowski, no doubt, is planning his next round of secret pandemic-related stock trades.

When they’re not behaving badly outside of Capitol Hill, both men sit on the Foreign Affairs Committee with Omar.

“If Andy Kim and Tom Malinowski truly cared about Ilhan Omar’s anti-American and anti-Semitic rhetoric, they would immediately demand Omar’s removal from the Foreign Affairs Committee,” said NRCC Spokeswoman Samantha Bullock on Thursday. “Anything less proves Kim and Malinowski would rather play partisan politics than do what’s right.”