Chris Christie may be attempting a comeback, Save Jerseyans, but if the reaction to his Reagan Library speech last Thursday is any indication? He’s got his work cut out for him.

It’s not for lack of trying.

His address – delivered a decade after his first appearance at a time when Christie’s career looked far more promising – was red meat for the GOP’s anti-Trump faction.

“We need to be the party that embraces the truth even when it’s painful,” Christie told his audience. “Grievances and conspiracy theories always die hard. But they can only live in the darkness. Their days are numbered once the light of truth shines down.”

“If the requirement in today’s politics for getting your support is to say a bunch of things that aren’t true, no thank you. If it requires bending to the will of any one person rather than advocating ideas for the good of all people, then count me out,” Christie continued, adding that “[n]o man or woman, no matter the office they have held or the wealth they have acquired, is worthy of blind faith or obedience. That’s not who I am, and that’s not who we are as Republicans.”

He easily could’ve focused his address on Biden’s blunders abroad, his failures domestically, cancel culture, or any number of other hot topics that respresent points of unity between the GOP base and the American center.

Unfortunately for Christie, while he is personally unpopular among most Republicans, Trump (or at least Trumpism) remain extremely popular in the Republican Party.

Further complicating matters is the fact that the Left and their allies in the Never Trumper caucus seem unwillingly to let things go. At least not easily.

Leftist “journalist” Roland Martin let Christie have it during his post-library weekly appearance on ABC.

Never Trumpers including Bill Kristol and Joe Walsh took to Twitter on Monday and piled on: 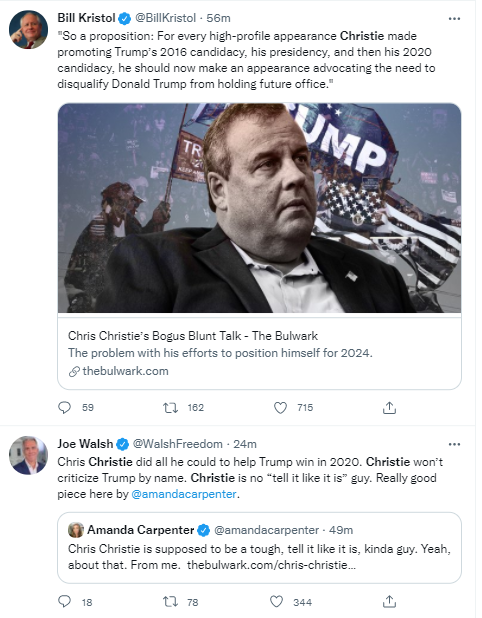 George Conway was a bit more ambiguous, retweeting the following on Saturday:

“Should we mockingly remind Christie that he failed to speak out during his years of cringey servitude to Trump, when taking a stand might actually have done some good? Or should we welcome him back to the rational universe?” My latest. https://t.co/9x0UbCEeKJ

So where is it exactly that Chris Christie can call “home” in 2021?

2024 is a lifetime away politically-speaking. A lot can change. It’s also possible that a crowded field could produce a surprise.

But we can’t assume facts not in evidence, Save Jerseyans, and from where we’re sitting today, it sure looks like the former Governor of New Jersey may’ve burned (or closed?) one too many bridges over the past several years. No one trusts him, few like him, and his former reputation for brutal honesty – “telling it like it is” – now seems like a bad joke to a majority of observers.