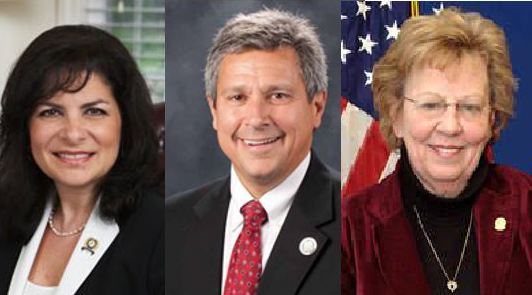 They may be out of the legislature now, Save Jerseyans, but you’re rarely ever “done” in New Jersey politics assuming you’re a connected insider.

Governor Murphy will nominate the pair and, if their former colleagues in the State Senate confirm them, they’ll earn $82,000 a piece for this part-time post.

Dawn Addiego (D-8) lost her reelection battle after switching parties back in early 2019. She’s getting a soft landing: according to New Jersey Globe, Murphy will nominate her to serve as the Burlington County Superintendent of Elections on Tuesday.

The outgoing occupant of the office earned $94,320 annually.

“Dawn Addiego lost and is rewarded with a patronage job of running our future elections,” said newly-minted Senator Jean Stanfield who defeated Addiego last fall. “If Burlington County Democrats continue to hand out jobs to their politically-connected friends, then they will go down the same losing path as Addiego. Voters have had enough of this.”

Whether voters have had enough remains to be seen, but the immorality of it all can’t be denied. Is government supposed to be where you go to get taken care of? I never thought so; then I started paying attention to how things work in the Garden State.