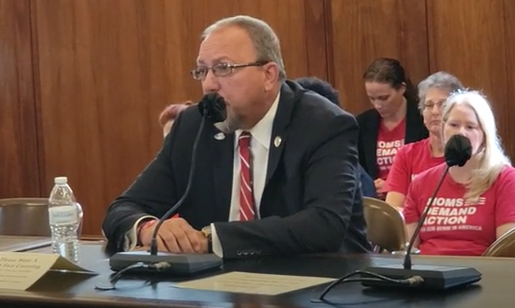 “If I were to sit here and list all the problems with this bill, we’d be here until sometime next week,” quipped Durr, adding that the legislation would deprive “our most vulnerable populations” of the ability “to protect themselves from danger.”

The 33-page bill’s draconian provisions include a liability insurance requirement for permit holders and broad new gun free zones which would include most places inside the Garden State.

“It is possible to care about public safety and Constitutional rights at the same time, I promise you. In fact, I’ve introduced several bills that do just that. I have a bill that recognizes the danger survivors of domestic violence might be in on a regular basis and puts them at the top of the list for review when they apply for a carry permit,” continued Durr. “I want them empowered to defend themselves if need be. You should want that too. I have another bill that encourages firearm safety training by offering a tax incentive, and another that helps low-income people pay for firearm safety training when they couldn’t otherwise afford it. These are the kinds of things we should be doing to keep the people of this state safe, not disarming the public as crime rates and carjackings soar.”

“This isn’t about safety. It’s about control,” Durr added, urging his colleagues to oppose this “unconstitutional abomination.”