Last year (with the help of my company, Exit 3 Strategies, and specifically my former partner Randy Ford) Washington Township in Gloucester County went red. The GOP picked up three council seats and took control of the town. Council President Chris Del Borrello went head to head with the still Democrat Mayor, Matt Lyons to try and keep taxes down. Around the same time, newly elected Freeholder Larry Wallace was raising concerns that Mayor Lyons might have a terribly conflict of interest issue on his hands.

Unlike Assemblyman Rumana, Lyons actually did something wrong! You see, Lyons was not only the Mayor of Washington Township, but also the Gloucester County Counsel. And after six months of having a light shined on this ethical flap, the Supreme Court’s Advisory Committee on Professional Ethics determined that this was a bad, bad thing. 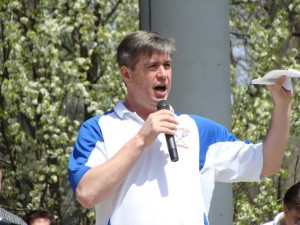 Lyons now had to make a choice. To keep his role as Mayor, or to keep his job as County Counselor. Thankfully, in a move that will eventually result in better leadership for the Township, Lyons has decided to step down from his elected position, rather than his professional one.

Gloucester County government is a bit more clean today, thanks to its Republican Freeholders.