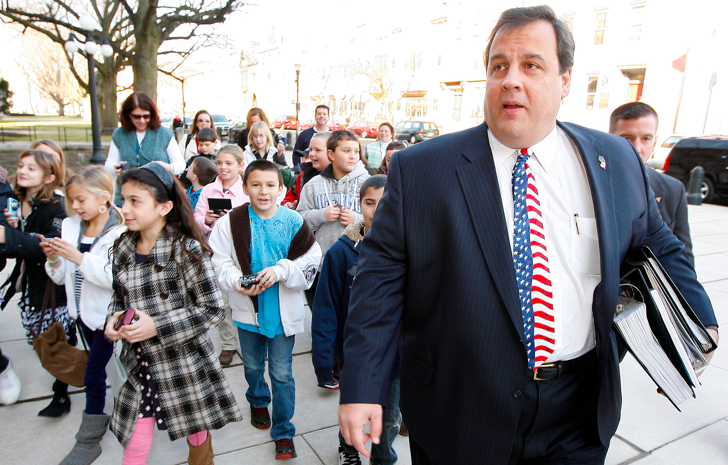 That’s the most accurate answer, Save Jerseyans, as Governor Chris Christie prepares to deliver his second “State of the State” this afternoon at the State House in Trenton.

You can click here to watch the Governor’s address LIVE beginning at 3:00 PM.

Your Blogger-in-Chief doesn’t need to regurgitate the Governor’s many laudable accomplishments over the past two years. We’ll get a summary this afternoon; for a more expansive look, check out this official timeline or, for you YouTube junkies, this snazzy video short from the Christie press shop. We’re proud of the Big Guy. Frankly, the only New Jerseyans who are worse off for Christie Christie’s election are those who were employed by MF Global.

I’m not pessimistic so much as realistic, folks. The Governor has worked miracles on pension reform and in other key areas despite the hostile composition of our state legislature. I knew he could do it; that’s why I was an early and vocal supporter of his candidacy. But the odds for substantive reform grew much longer after Professor Alan Rosenthal picked a Democratic legislative map. There’s no denying it. To make matters worse, we’re rapidly approaching the 2013 gubernatorial cycle. Democrats will increasingly look for ways to trip up one of the nation’s most controversial Republican figures. Finding pliable pols across the aisle may prove daunting between now and January 2014.

The Republican Party’s legislative future is also a giant question mark. This site’s good friend, Tom Kean, Jr., has been an effective leader and positive force in the State Senate. His caucus is much more dynamic and motivated on economic issues than it was before he took the reins. I don’t expect that to change dramatically going forward.

In the Assembly, we’re now living in the post-DeCroce era under a new minority leader: Jon Bramnick. Leader Bramnick seems like a very nice guy (I’ve only met him once). He boasts many discernable talents, including the art of comedy (he dabbles in stand-up). I’m also told he can raise money which is obviously important. That said, one of his talents isn’t conducting intraparty relations. On one infamous occasion, this staunchly pro-choice assemblyman all-but accused social conservatives of being an “intolerant” and counter-productive force in the Republican Party.

If it was a joke, then it certainly wasn’t funny.

I’m not sure if Asm. Bramnick has since revisited that theory, posited before the ’09 Election, at which time an openly pro-life, anti-gay marriage, practicing Roman Catholic named Chris Christie romped his socially liberal opponent at the November polls. I honestly, truly and deeply hope he has, Save Jerseyans. For now, I harbor some serious concerns about the ideological orientation of the newly-formed GOP Assembly caucus. We need party builders and happy warriors – in the Rubio/Christie/Reagan mold – who can passionately articulate conservative principles with a smile (and not a grimace like Steve Lonegan). We definitely don’t need a return to the “hey, let’s just run as ‘better managers’ and avoid ideological debates and big ideas'” strategy of the pre-Christie era.

But I still have faith, Save Jerseyans, uncertain as our state of affairs may appear.

I have faith in God. I have faith in our Republic, New Jersey, its people, and the rule of law. I also have faith in their Governor who has, among his many attributes, the uncanny ability to lasso unfavorable dynamics and steer them in his favor. For the reasons set forth above, he’s going to need every ounce of our support over the next two years to complete the task of saving New Jersey.