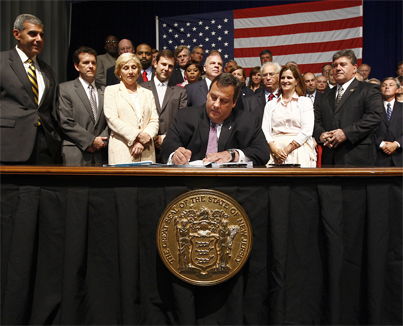 It’s that time again, Save Jerseyans. Our legislature is reorganizing, and the NJ Senate GOP released its list of committee assignments earlier this morning. You can read a complete assignment list by downloading this pdf.

Some good news? I’m very encouraged that the new “Higher Education Committee” will be headed by Sen. Sandra B. Cunningham (D-Hudson), an alumnus of the Governor’s transition team. Senate GOP Leader Thomas Kean Jr. (R-21) and Sen. Robert Singer (R-30) will represent the Republican caucus. These are reasonable people who I’d expect would be open to the Governor’s education reform agenda.

After all, the first baby steps of education reform in the Garden State have truly been a group effort.

Look no further than my home county of Camden for proof. At 2:00 PM today, Governor Chris Christie will visit Lanning Square School in Camden City to sign the “Urban Hope Act” into law. He had announced a private-public education project there back in June 2011; the stated goal of the project is to reform education through increased school choice and accountability.

The resulting legislation will, according to a release from co-sponsor Sen. Donald Norcross’s (D-5) office, yield dividends for those kids languishing in some our state’s poorest-performing school districts:

The legislation (S-3173/A-4426) would create a pilot program that would designate Camden, Newark and Trenton as “renaissance districts.” In each district, nonprofit entities – upon receiving local school district approval – could apply to the state Commissioner of Education to create up to four new public school projects, called “renaissance school projects,” which would be operated and managed by the nonprofit. The projects would be constructed with private funding. Both the local school district and the state Department of Education would need to approve each such project.

It’s a start. Click here to read the first reprint. Keep in mind… this bill won the NJEA’s support! And no, Hell hasn’t frozen over (to the best of knowledge). Also keep in mind that the NJEA lent its support to the Hope Act only after first opposing the bill. With passage a reality, their chief lobbyist is now saying that his union membership “have always supported public school choice.” Not really, but we’ll hold them to it now that they’ve said it!

Just don’t chalk it up to altruism. The NJEA may be thick but they’re not dumb, Save Jerseyans. They recognize that Governor Christie’s principled leadership has helped transform the education debate here in New Jersey.

And he didn’t accomplish this feat with “bipartisanship”; in other words, he didn’t undercut his position by negotiating, compromising, and conceeding to bad premises before first articulating his case to the voters. Remember: he made waves by declining to seek the NJEA endorsement in 2009. He then proceeded to hold open town halls at every Turnpike exit, passionately laying out his case for a fresh approach to educating our children. Democrats – particularly those with urban-intensive districts – were quick to warm to his message.

Of course, I’ve been arguing that “school choice” is a winning issue for the GOP since Save Jersey first opened shop in 2008. This is tangible proof. My only hope is that Republicans in Trenton and around the country make a New Years resolution to double-down on education reform and proceed boldly with taking their case directly to the people. The facts are on our side. Just add courage, stir, and let it bake until November. No one issue is as important to the economic, cultural, and civic sustenance of our nation!