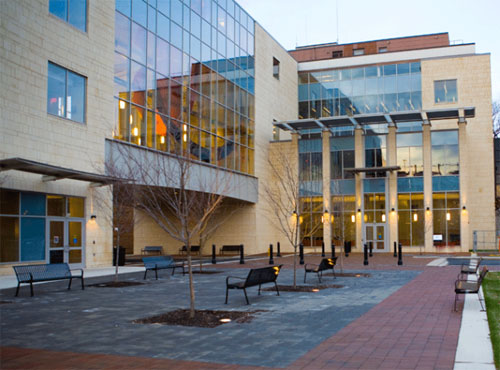 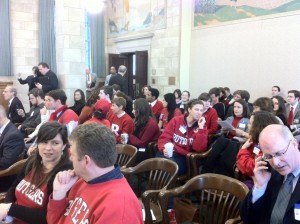 lynch mob |ˈlɪntʃ ˌmɑb|noun – a band of people intent on lynching someone.

You know, I was actually kind of surprised to find that “lynch mob” was in the dictionary as one phrase, but there it is. It isn’t exactly specific though, it uses the word lynch in its own definition, so lets get that.

lynch |linCH|verb [ with obj. ] – (of a mob) kill (someone), esp. by hanging, for an alleged offense with or without a legal trial.

Oh ok there we go. Yeah I am going to go out on a limb and say that is not what Rutgers students and faculty were doing last Thursday when they held a rally at Rutgers Camden to protest the proposed merger with Rowan University. Democrat Senate President Steve Sweeney seems to feel otherwise.

In a lengthy article with the Gloucester County Times, Sweeney makes several statements regarding the proposal and how he would have done things differently. Good for him, I suppose. But tucked neatly in the last half of the article is a short line that states,

If I had not been alerted to it, I may have actually missed it. Bottom line, Senate President Sweeney should apologize for these comments. I was on campus the day of the rally (although I did not attend). There was no disturbance, it was clean, orderly, and finally, peaceful. At the very worst there may have been some group chanting that is incredibly common among rallied crowds. No one was threatened, let alone killed by hanging, and no one was called out as a target. It was just students and faculty expressing their disagreement with a plan that is being shoved down their collective throats, for better or for worse (most likely worse).

Sweeney goes on to state that he disagrees with how the process has been handled so far.

I personally wouldn’t have rolled out the report this way. I would’ve rolled it out with the details. That at least eliminates the uncertainty. … if you’re going to be angry or upset, you’ll know why.

With that I cannot disagree, Save Jerseyans. I understand that the UMDNJ committee report was public and that people would have seen it whether Governor Christie made an official announcement and endorsement of the plan, but it was definitely handled all wrong. The plan includes no financial data (which committee Chairman Barer kept saying was outside the scope of their mission during his testimony today), no real timeframe, and no real guidelines as to how the merger should proceed. Instead it makes a statement that the merger must proceed and passes the buck off to someone else while those of us it affects are left waiting.

Governor Christie made an incredible political blunder by taking the bullet for the commission and essentially attaching his face to the proposal that he really had not-too-much to do with. The only positive out of the mis handling is that more and more people seem to be learning about George Norcross
, and I haven’t heard a positive comment about him in days.

That of course does not outweigh the damage already done. College students, grad students, and law students are currently making their final decisions for where they will be attending school in the fall. The uncertainty of this plan is no doubt going to hurt enrollment, which means less money from tuition to fund the respective institutions.

Sweeney also make another point about the Cooper Medical School at Rowan University, the obvious reason for this entire merger in the first place.

Without the merger, Sweeney said, Cooper Medical School of Rowan University would be the only accredited medical school in the country lacking an affiliation with a research institution.

Wouldn’t that just be a shame? Here is my question though, and here, you can quote me.

When you were selecting a university to affiliate the Cooper Medical School with, don’t you think it would have been a good idea to choose one that was a research institution?

This is not rocket science, Save Jerseyans, it would have avoided the whole perceived problem.

Anyway, Save Jersey is calling on Senate President Sweeney to retract and apologize for his offensive comments regarding the peaceful assembly of Rutgers students and faculty. That type of hyperbole is not becoming of a Senator, certainly not one in a strong leadership position. We urge you to call Senator Sweeney’s office and let him know that you do not appreciate it either. He can be reached at (856) 251-9801.