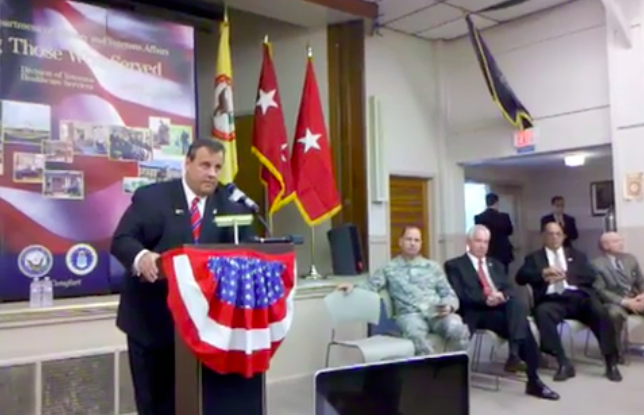 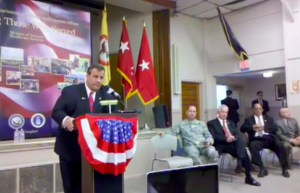 You may’ve heard about Governor Christie’s “shouting match” with a “former Navy Seal” yesterday afternoon in Roebling, New Jersey. It was all over the news last night. The Governor often is, and it’s not unusual for a emotionally-charged town hall verbal encounter to be the impetus of the coverage.

But the “Navy Seal” in question? None other than William Brown. Ring a bell?

From ABC27 (yes, the Harrisburg station):

Christie got into a heated exchange with 34-year-old William Brown, who is unhappy with the governor’s plan to merge Rutgers University’s Camden law school with Rowan University.

The exchange began when the former Navy Seal questioned the governor’s plan to merge the two South Jersey schools Thursday. It ended with the governor berating the Mount Laurel man, who attends Rutgers-Camden and interrupted Christie several times before being escorted out.

The governor said: “Let me tell you something, after you graduate from law school, you conduct yourself like that in a courtroom, your rear end’s going to be thrown in jail, idiot.”

Our long-time readers know we’ve been covering Mr. Brown for awhile. He’s been a public figure in New Jersey politics for several years now. He’s testified in Trenton. Advocated for legislation. Save Jersey cheered his early work for servicemen as head of the “Veterans for Education” organization in 2008. We criticized him for abandoning the South Jersey GOP and running on a liberal Democrat slate for Assembly in 2009.

At all times, I think it’s perfectly fair to categorize William Brown as a vocal activist for more than one cause.

Of course, many South Jersey Republicans believe his favorite cause is “William Brown,” and will therefore conclude that he’s perfectly happy to have been on the receiving end of a signature Christie smackdown since it resulted in intensive media coverage. I’ll reserve final judgment on this particular incident until I see the video; I’m disinclined to trust print media accounts of the exchange. Their tone always suggests that the Governor was picking on someone defenseless.

I do, however, think you need to view the entire incident in this context: Mr. Brown is not a neutral party with a neutral opinion of the Governor. He’s an active Democrat with an anti-Christie worldview, not a random private citizen who showed up and happened to catch the Big Guy on a bad day!

Again, like I said, Bill is not a stranger to participation in public forums; in fact, he’s questioned the Guv at least once before. He posed a veterans affairs-related question to Governor Christie back in September 2010 at a veterans’ event (notably a full year after Mr. Brown’s failed bid for legislative office on the Corzine slate).

I think you’ll agree that THAT particular question was met with a perfectly civil response from the Governor:

28 thoughts on “Chris Christie and Bill Brown Have Some History”