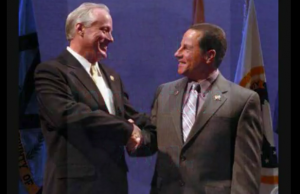 You may recall back in Fall 2008, Save Jerseyans, when LD-1 Assemblycrat Matt Milam (D-Vineland) got jammed up for parking in a handicap parking spot.

But now his running mate and equally dense buddy, Assemblycrat Nelson Albano (D-Vineland), could be in much bigger trouble if this trooper’s story is true (h/t Christopher Baxter of NJ.com):

A State Police trooper pulls over a South Jersey assemblyman one day in February. The lawmaker tries to get out of the ticket, and later complains the trooper targeted him as payback because the Legislature voted to make public employees pay more for health and pension benefits.

The trooper says that after he refused to throw out the lawmaker’s ticket, his own union leaders pressured him to make it disappear as a favor to a “personal friend.”

And the union president says the finger-pointing was news to him, insisting he had never heard of the traffic stop or the allegations and no one from the union tried to interfere.

But this strange tale of the troopers, the ticket and the Trenton politician is no television script. It’s now the subject of an internal State Police investigation, detailed in interviews and confidential documents obtained by The Star-Ledger, including internal complaints filed by the trooper and the lawmaker.

Every judge, legislator, councilman and statehouse shoeshine in New Jersey government knows that using your public office to get out of a ticket is a big, giant, whopping no-no, Save Jerseyans.

Blaming the ticket on PENSION REFORM?!?! Now I bet THAT’s a first! Even in the Soprano State.

All that’s left now is for Jeff Van Drew to jump Townsend’s Inlet in his car; then the LD-1 legislative contingent can officially shoot its own “Fast and the Furious” movie…