The odds are certainly stacked against them, but two New Jersey men (Nick Purpura and Ted Moran) will appear before an administrative law judge in Mercerville this morning at 10:00 am to challenge President Barack Obama’s eligibility for New Jersey’s June 5th Democratic Primary. 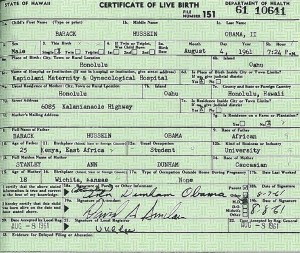 Purpura and Attorney Mario Apuzzo of Jamesberg, who represents both men, delivered their objection personally to the Office of the Division of Elections, 225 W State Street, Trenton, NJ. CNAV was present. Purpura and Apuzzo wanted to see Secretary of State and Acting Governor Kim Guadagno. Instead, they saw Mr. Robert Giles, Director of the Division of Elections. Mr. Giles and his employees received the two men with courtesy and respect, and did not object to CNAV recording the conversation. Afterward, Apuzzo quipped, “We’re not political prisoners!”

You’re not always going to like it’s fruits and foibles.

Me? I’ve never been a “birther.” I firmly believe it’s safer to assume incompetence before conspiracy when evaluating such matters. For example: sure, it’s possible that the “long-form” birth certificate produced last year was a forgery. Possible. Mathematically speaking. Rick Santorum also MIGHT defeat Mitt Romney in the GOP delegate count. Stranger stuff happens every day in this crazy world of ours. But it’s much more probable, as Nathan Goulding at NRO explained at the time, that the White House staffers responsible for distributing it to the media weren’t Adobe Illustrator experts.

Hence, the “incompetence” here (something at which this administration excels) is more likely than the “conspiracy.”

Personally, I’ve always thought that the birther movement’s energy is really misdirected anger at the mainstream media for failing to properly vet Barack Obama in 2008. There’s simply too few hard facts to impute sincerity to the entire movement. After all, this President’s radical views and disturbing associations ARE undeniable and, as such, pose a very real threat to the United States of America. Focusing on anything else at this point in time is a fruitless distraction. So, in a strange way, Obama’s liberal media buddies created this controversy by doing such a crappy job of covering Rev. Wright and Bill Ayers. Conservatives play right into their hands by indulging it.

It’s almost as if they planned it…