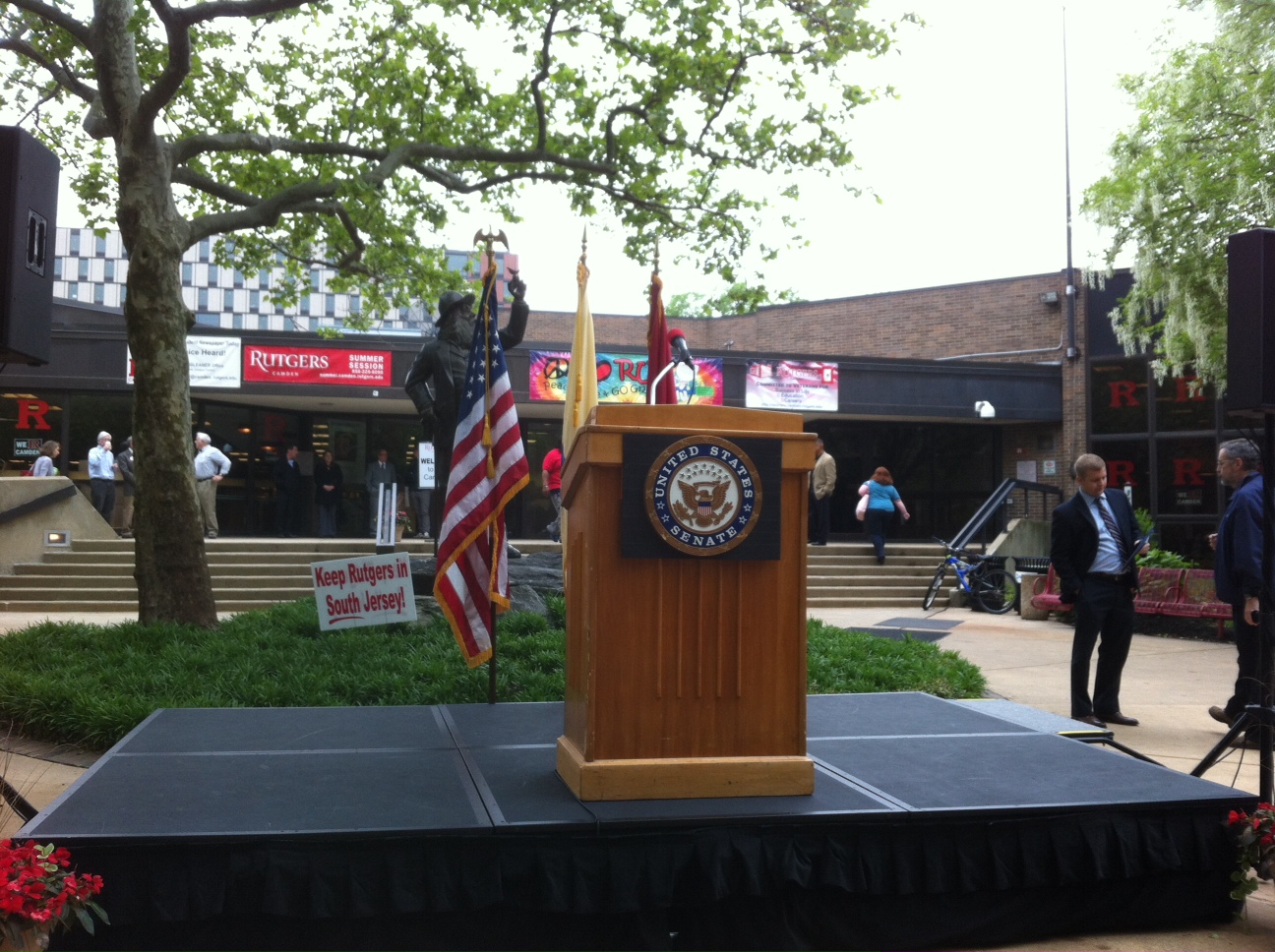 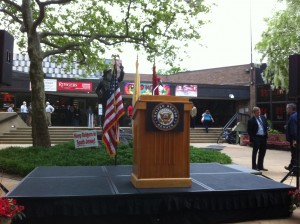 Rutgers-Camden is ground zero for the contentious Rutgers Rowan Merger debate. George Norcross and Frank Lautenberg have been fighting tooth and nail on this issue for the last few months, and as the time July 1 deadline continues to approach, and the control of the situation moves into the Legislature, both men show no sign of stopping.

Today Senator Lautenberg is taking a rare trip down the Turnpike to Rutgers-Camden to take another shot at the Bossman himself.

The stated reason for the trip is to give a press conference on student loan interest that is slated for a timed increase this July, something that President Obama thought was a good idea back in 2007 but also refused to vote on it.

However, as I said on Monday, Rutgers Camden is an awfully long trip to take just to talk about interest rates. Lautenberg is here to make a statement, and he’s here to bolster his own position on the Rut-Row Merger. So keep refreshing this page for up-to-the-minute updates on this press conference. I will be updating anytime something interesting happens.

11:51AM – Press conference was supposed to begin at 11:30. Still not even close to beginning. For a while the only “media” here was myself and Blue Jersey. Someone from the Inquirer just arrived, but I overheard her say that she was “in the area” covering something else this morning. I find it interesting that the mainstream media is growing increasingly disinterested in this issue . . . and a visit from a sitting United States Senator . . .

11:56AM – There is some obnoxious guy here who keeps trying to debate me on issues of national politics. I am sure that he means well, but come on man. Leave me alone.

12:00PM – 30 minutes late, still haven’t started. Much larger crowd has gathered at this point. Less students than I am sure the Lautenberg people would like, but being as the law students (including myself) wrapped up last week, and the undergrads are in finals now, I am not that surprised. Still, big crowd.

12:10PM – State Senator Norcross is here. I honestly pegged it as a 50/50 shot that he would be here. Also in attendance are Keith Walker (Norcross’s opponent last election), Mayor Dana Redd, Bill Brown, and Assemblyman Joe Cryan. I have a feeling there are more people, but honestly I don’t feel like standing up.

12:19PM – TWITTER CONTEST! Tweet to @SaveJersey the time you think this event will FINALLY begin. If you get the time right we will tweet your name out and try to get you some followers.

12:23PM – Intro speaker just announced that Lautenberg sponsored the “you have to be 21 to drink” law. Students booed.

12:25PM – And we have finally begun! Lautenberg started the event off by proclaiming his support of the anti-merger movement. So much for student loan interest being the topic.

12:27PM – Now he is talking about student loan interest rates, and the GI bill, and he’s citing a bunch of numbers. He is not mentioning the fact that Democrats are the ones who set the interest rates to double in an election year.

12:30PM – Back on message “Rutgers is part of Camden, it belongs here! We can’t lets the powers that think they should be in charge make that decision.” Direct shot at George Norcross.

12:31PM – Lautenberg just wrapped up his speech. 6 whole minutes. Everyone is sticking around, it will be interesting to see if he sticks around for Q&A.

12:37PM – According to a member of the press, the Rutgers Board of Trustees will be meeting today to approve a resolution saying that they will accept alternative plans but not a complete and total takeover by Rowan University.

12:40PM – Lautenberg is talking about the federal investigation on the merger. Wants to make sure that the quality of education does not decreased when a plan like this goes through. I agree, we need to make sure that no matter what form this plan takes, it does not gut Rutgers to fund Cooper Hospital’s medical school.

12:41PM – The guy who was trying to debate me before asked Lautenberg if universal healthcare would solve student debt “overnight.” Lautenberg deflected and turned his answer into a cheerleading session for ObamaCare. What an off topic question.

12:43PM – Question on costs of the merger. Lautenberg says that an analysis of the costs is one question he hopes will be answered during the investigation that is “being planned now.”

12:45PM – Asked about the open letter from Sweeney. Press wants to know if it indicates a primary challenge is forthcoming. Lautenberg shrugs off the letter. “Its among the letters I will leave to posterity, I just can’t treasure it enough.” Gets laughs. Did not answer the question though.

12:47PM – Lautenberg says he wants to pay more taxes to keep our country strong. With all do respect, Senator, no one is stopping you from donating to the treasury.

12:50PM – Lautenberg just made his 9th joke about how old he is. I am not criticizing, whatever works. But I think it should be noted what his fall back is when he runs out of things to say.

12:51PM – Someone asked what is going on with the investigation of George Norcross. Calling him an “enemy of camden for decades.” Lautenberg wont answer because FBI investigations (especially ones that probably do not exist) are not his department. This is true, speaking on an issue like that would be irresponsible.

12:51PM – Keith Walker, former GOP State Senate candidate in LD-5 and Rutgers Camden alumni, made a short speech thanking Lautenberg for his support of Save Rutgers.

12:52PM –  closes by saying that his purpose for being here was not to fight George Norcross publicly, but that people should make public the truth behind anything going on here. I couldn’t agree more. And with that I am signing off. Thanks for reading Save Jerseyans.

35 thoughts on “Save Rutgers: LIVE at the Lautenberg Press Conference at Rutgers Camden”