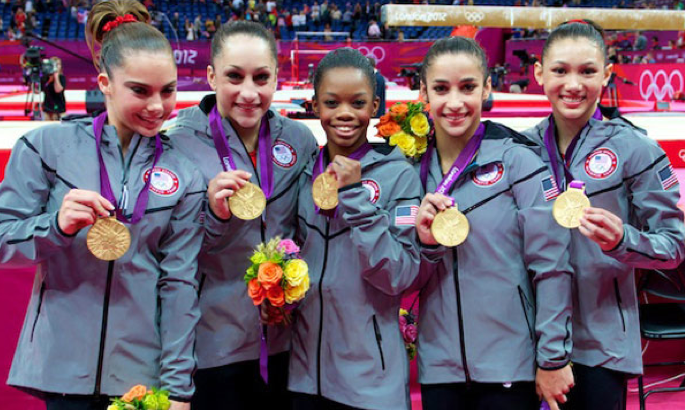 They certainly “built it” themselves, Save Jerseyans, and the glorious result was the first gymnastics team gold medal for our United States since 1996.

The fabulous five! America’s athletic finest. And what a diverse group:

Kyla Ross – Her dad is black and Japanese; her mom is Filipina and Puerto Rican.

That’s America, right? Every other nation fields teams with athletes that are internally homogenous (including 2nd place Russia and 3rd place Romania); you can’t identify another Olympic delegation with anything close to resembling the rich and varied background of this year’s U.S. women’s team. Even their leader, USA Team Coordinator Márta Károlyi, is herself a defector from Romania along with her legendary husband and coach of the ’96 team, Béla Károlyi. The Károlyi couple sought political asylum here and Team USA has obviously been better for it.

I fully appreciate that the Olympic Games are nominally apolitical. But we all know they’re not in actuality, folks, and each Olympic games offers its own unique set of political circumstances. This year all eyes are on the familiar suspects (Iran, Israel), the rivalry between America and China (the “new” Soviet Union), as well as a few major historic developments (notably Saudi Arabia’s decision to field its first-ever female competitors).

For what it’s worth, I think all Americans should celebrate both the sports/human story coming out of last night’s achievement (our women’s gymnastics team’s gold medal victory) as well as the political dimension (the successful “American Experiment” which they embody). It might be all the more important given yesterday’s Rasmussen tracking poll reporting an epic racial gap growing as we inch towards November. The President hasn’t been able to unite us. Perhaps five outstanding little ambassadors of what’s right with America can get the job done?