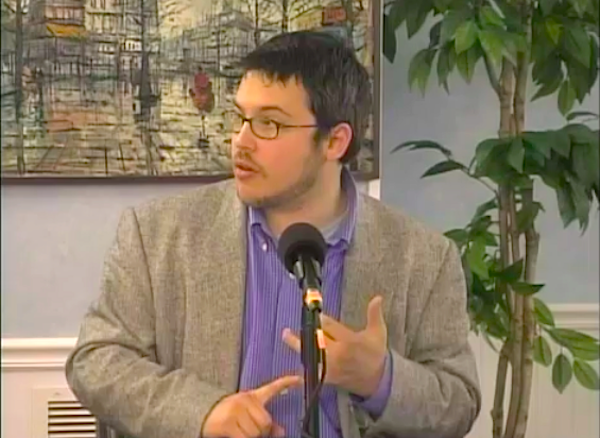 On October 15th in Parsippany, despite an unusually cold (37 degrees) fall morning, participants at the Defending the American Dream Summit were both warm and welcoming, Save Jerseyans. The mood at the Saturday conference put on by Americans For Prosperity was jovial and good spirited; the topics, however, were dead serious.

Conservatives of all stripes and types, from social to fiscal, Romneyites to Paulites, isolationists to interventionists, committeemen to Tea Partiers, Republicans and even a few Democrats, were all gathered to hear the great speakers lined up to talk about our nations future.

Speaking to the assembled was a well rounded list of well known conservative thinkers, activists, and authors including Dinesh D’souza, Jonah Goldberg, Michelle Malkin, John Fund, and James O’Keefe.
Ms. Malkin and Mr. Goldberg were even nice enough to spend some time talking to the Save Jersey community…
Breakout sessions ranged in topic from health care, citizen journalism, polling, to “hydrofracking” and more. Breakout sessions were lead by representatives of Townhall.com, The Franklin Center, Americans for Liberty, Texas Watchdog, Mountaintop Media, the Heritage Foundation, the Manhattan Institute, and the Independent Women’s Forum among others. Conference attendance was quoted as being somewhere between 800 and 1,100 participants and both the main hall and breakout sessions were overflowing with people eager to learn both the details of our nations present dangerous path and the tools that they can use to spread the message of a restoring a responsible and prosperous America.

Intro speaker and AFP board member Frayda Levy outlined the raison d’etra of the conference by stating “we are here to restore the civil society that was the founding fathers vision of this country,” emphasizing the point that when the state grows civil society shrinks. She continued “we don’t have to cross the Delaware in the frigid cold….but sometimes we have to go to the street” and rally.

Author-intellectual Dinesh D’Souza was greeted like a rock star as he addressed a packed main hall. Positing that President Obama was not the bumbling political leader than some conservatives think him to be, he put forward his now well known theory that the President is intentionally downsizing the American economy and redistributing our wealth around the world in order to make up for the perceived crimes of the West. D’Souza stated that the President didn’t learn anti-Western ideology overseas but that “Obama learned the chapter and verse of anti-colonialism in the US” at university.

To buttress his case, D’Souza pointed to the $2 billion in aid foreign the administration has given to Brazil and Columbia to drill oil in their nations while slowing drilling on federal land and off shore at home. D’Souza reflected how in India, his “destiny would have in large part been given to me….by coming to America I can make my destiny.” Motivated by a desire to save the American Dream, which he defined as a “future that isn’t given to you” but one that is “constructed by you,” he pitched his documentary 2016: Obama’s America which has been seen by over 3 million people and is the #2 highest grossing political documentary of all time.

Jonah Goldberg, editor-at-large of the National Review Online and author of Liberal Fascism, encouraged participants to be “happy warriors” and characterized the philosophies of Locke and Rousseau as that of individuality and god given rights as opposed to group rights and man made rights. Goldberg stated that “the Left makes a category mistake,” they “want to get from government what people used to get from church, family, and other groups…they think government can love us.” He also pointed to the infamous line from the DNC, “government is the thing we belong to,” to illustrate his thesis.

Ripping into those who extol modern China as an example for the US, Goldberg discussed how “China tried markets as a last resort” only after their previous economic policies of collectivization killed 65 million of their own people; now they have a higher standard of living and live longer. Goldberg said “capitalism is the best system ever created for peaceful cooperation,” perhaps so peaceful, he postulated, that people didn’t realize that even a simple thing like a toaster has parts made cooperatively by people in different countries all working together.

Voter fraud, an issue that most on the Left think is much-to-do-about-nothing, was discussed at length by John Fund, Senior Editor at the American Spectator. Fund used the example of 2 million dead people who are still on the voter rolls, a situation which is clearly begging for abuse. Zooming in on a particular example, the election of Senator Al Franken in 2008, Fund alleged that “over a thousand felons illegally voted,” and noting how “Franken was the 60th Senate for Obamacare” to drive home the real implications.

The Defending the American Dream Summit also included local notables such as Congressman Scott Garret, State Senator Mike Doherty, and “Barbara from Harlem”. The summit ended at 5pm for most participants, but continued afterwards for a special dinner for VIP ticket holders. Hopefully all of the attendees carry the spirit of the event — and everything they learned — forward as we work towards a successful November 6th.