Trunk, Wallace and Vanderslice Expected to Take on Steve Sweeney in Bid to Turn His District Republican Red 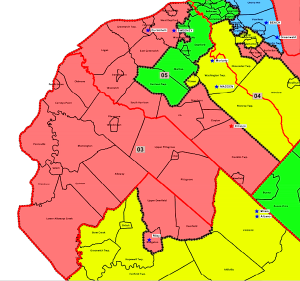 We’ve had indepenent confirmation from a very reliable source that the Republican ticket in New Jersey’s 3rd legislative district is ready to roll, Save Jerseyans. All that remains is for an announcement date to be set.

A local blog, Salem County Watchdog, has also apparently been following this story closely and its information seems to comport with our own.

Attorney Niki Trunk is reportedly prepared take on Senate President Steve Sweeney; she is the former deputy mayor of Harrison Township and, until very recently, worked in New Jersey’s Office of the State Comptroller for the Medicaid Fraud Division. She has a MBA and law degree both from Temple University.

Trunk’s entry is no surprise and has been the topic of rumors for weeks; the more recent news is down ballot where apparently Gloucester County Freeholder Larry Wallace and Salem County Freeholder Bob Vanderslice are expected to run for the two Assembly seats current respectively occupied by Asm. John Burzichelli and Asw. Celeste Riley.

Regular Save Jersey readers are familiar with Larry Wallace, an occasional special blog contributor here at Save Jersey. He’s also well-known as a passionate and courageous taxpayer watch dog in Democrat-dominated Gloucester County; if you need proof of Larry’s willingness to stir the pot, back in August, someone blew up his mailbox.

Vanderslice, for his part, helped lead a GOP takeover of Salem County government in 2011 on a good government reform platform. However, Vanderslice was the low vote-getter of his 3-person ticket, winning by only 53 votes over the closest Democrat competitor.