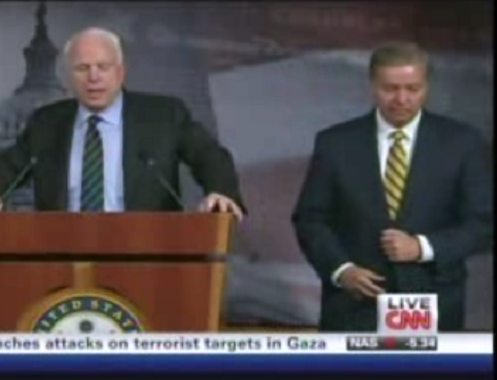 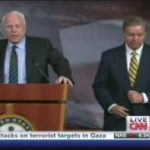 I haven’t been this annoyed since Newt Gingrich deliberately undercut Paul Ryan’s courageous attempts at entitlement reform, Save Jerseyans.

To be clear, I’m categorically opposed to reductionism after electoral losses. I prefer to focus on root causes. Residual public blame from the financial crisis and a young electorate that relies on a romanticized Clinton era for their economic benchmark rank among my top reasons for the loss, both which we’ve discussed at great length here at Save Jersey. But then there’s just plain old selfishness and stupidity.

And the decision of BFF Sens. John McCain (R-AZ) and Lindsey Graham (R-SC) to sandbag Sen. Rand Paul (R-KY) can’t be rationalized as anything but selfish and stupid.

Paul put it all on the line on Wednesday evening. He risked generating hours of unedited, unscripted video that will last his entire political career (a scary prospect for most politicians) and possible scorn from widely-published pundits all to win attention to an important constitutional transgression. But guess what? It worked. The mainstream media actually mentioned his filibuster, pro-Rand hashtags dominated Twitter, and folks like Jon Stewart who aren’t exactly in the conservative coalition were openly supportive of his effort.

For his efforts — efforts which, I might add, the GOP desperately needs right now in order to successfully appeal to new demographics — McCain and Graham ridiculed Paul’s filibuster designed to finally obtain clarification of the Administration’s drone strike policy from the Justice Department. Graham was particularly nasty, telling reporters “I find the question offensive,” shortly after dining at the White House with the President who wouldn’t address Sen. Paul’s question! A President who did absolutely nothing to pursue personal diplomacy with Congress as ALL of his predecessors had done during the first 4.5 years of his presidency. He’s been one of the most partisan chief executives in American history.

Now McCain and Graham throw one of their own under the bus for a free meal and a press blip? When the President is obviously seeking the illusion of bipartisan cover after a less-than-successful sequester bluff?

Were they angry about someone else stealing their thunder as the self-anointed GOP fopo experts in the upper chamber? Or are they just that ignorant of how destructive those types of comments are for our troubled party?

Motivations frankly don’t matter. The optics of McCain and Graham’s behavior are absolutely awful, the strategy (if there is one) is unarguably poor, and the morality is positively abhorrent.

We finally find a Republican capable of selling a constitutional argument (the right to not be killed by a flying government robot absent a trial) to virtually every segment of the electorate… so McCain and Graham dump all over him?

Wise up or it’s time to retire, gentlemen. I #StandWithRand, and so does everyone else. Not you.

5 thoughts on “This is Why We Lose”