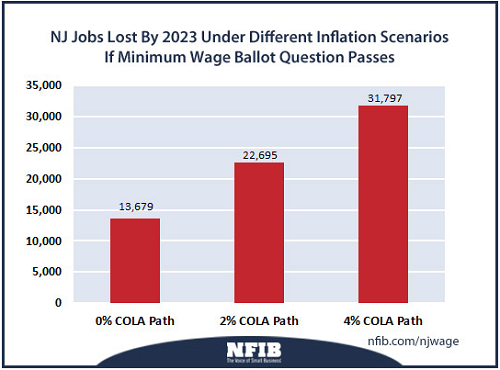 You’ve read plenty on Save Jersey about the minimum wage in recent months. Pandering Democrats, scared Republicans, and a whole lot of people with zero business experience under the Trenton State House’s dome think it’s a great idea. You and I live in the real world; consequently, we know better than that!

But if you’re still not convinced that tying our state’s minimum wage to the consumer price index is a bad idea on an epic scale, then perhaps you’ll listen to the experts fighting in the trenches? A study was recently conducted by the National Federation of Independent Business (NFIB) into the potential effects of a prospective New Jersey minimum wage hike. Here’s what they found:

Terrifying! Absolutely, positively horrible. And there wouldn’t be a single state resident capable of escaping the negative consequences without leaving the state altogether. “An annual increase based on the consumer price index is a bad idea for everyone.  It makes it difficult for businesses to plan year to year and it could lead to raises in years when the economy is suffering,” said Thomas Bracken, President and CEO of the New Jersey Chamber of Commerce. “Furthermore, making it a ballot question in the form of a constitutional amendment sets a bad precedent for resolving contentious issues that should be decided by our representatives in Trenton.”

This minimum wage increase will nevertheless appear on the November 5th ballot; if the proposed constitutional amendment passes, then it will take more than the act of a future legislature and governor to overcome it. God help us! I don’t want to move to Pennsylvania, but New Jerseyans who actually want to prosper are quickly running out of options.