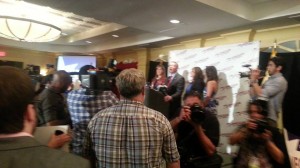 Round 1 is over and the two frontrunners have come out on top. Former Mayor Steve Lonegan finally walked out of a statewide GOP primary the winner, and by quite a large margin. Likewise, Mayor Cory Booker strolled through his four way race with little to no serious opposition anywhere near his numbers. So what happens now?

The candidates each gave their victory speeches in a way that you would expect. Booker attempted to channel 2008 President Obama and run above the board, pledging to unite and champion a positive message. On the other side of the aisle, Steve Lonegan quoted Patrick Henry and talked about loving America. The two are almost parody’s of themselves. 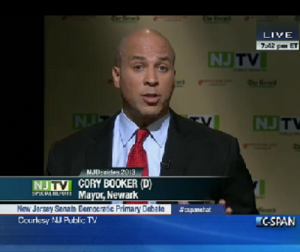 I believe Booker when he says that he will be running a positive campaign. Much like he did during the primary, he will ignore Lonegan unless the Lonegan camp makes another mistake like its allegedly racist tweet from last week. Barring another politically incorrect disaster, Booker will tend to focus on himself while repeating the same tired themes the Democrats have been running on since “Hope” and “Forward” became viable political platforms.

The fact is, Booker will not need to go negative simply because the media will do that for him. The media loves Cory Booker, almost as much as Wall Street and Silicon Valley donors do. One person the media does not love is Steve Lonegan, and they will ensure that we all know it by mid-October. The media’s angle will not be to destroy Lonegan so much as to delegitimize him, to pull a Palin on him and make him seem as dumb as rocks. Thankfully Steve Lonegan is no Sarah Palin and should not make things quite so easy.

The Lonegan campaign will come out of the gate swinging, and they need to. Booker, like a Christie on the left, polls well across the board and is generally considered likable. Those running the Lonegan campaign are some of the most vocal critics of the Republican Party in recent years for its alleged lack of spine and willingness to call Democrats out on the issues and personal dirt. Expect Booker to be forced to answer for some of his more liberal positions that are outside the mainstream, and don’t be surprised to hear him backpedal his obvious leap to the left that occurred during the primary when candidates like Rush Holt were taking him to task.

We are 9 weeks out from this Special Election and picking a new Senator for the our State, and no doubt a lot will happen. The Game of Jersey will be anything but dull.

3 thoughts on “Game of Jersey: What to Expect from Lonegan, Booker, and the Media”