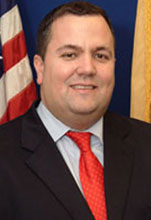 When N.J. Democrats and the late Alan Rosenthal conspired to produce a deep blue legislative map in 2011, Save Jerseyans, we were told that a premium was placed on “continuity of representation.”

I’m no Jeffersonian, but I also can’t understand why anyone without an agenda would think one-party rule should be protected. But that’s what they wanted, and that’s what we got.

Here’s the end result… we’re once again living up to our reputation as one of America’s slimiest political climates.

Assemblyman Al Coutinho (D-Essex) resigned from the General Assembly earlier today, reportedly under the cloud of an ongoing investigation by the N.J. Attorney General’s office. Coutinho represented Belleville and part of Newark, a composition that made his district one of the state’s bluer pockets.

It’s impossible to craft forty equally-competitive districts. I get it. But when the Essex machine meets to select Coutinho’s replacement in the 29th Legislative District, you can be damn sure that the replacement will represent the same corrupt machine that birthed Coutinho.

Continuity of representation? Or corruption? Think on it.

4 thoughts on ““Continuity of Representation””