“DREAM” or not, Save Jerseyans, a version of the New Jersey DREAM Act moved closer to becoming reality this week.

On Thursday, the Senate Budget and Appropriations Committee passed the Senate’s version along party lines, 8-3, with Monmouth County’s Jennifer Beck abstaining. The GOP members’ objections cited procedural concerns or problems with the draft language itself including a loophole which could discriminate against private school students.

A vote by the full Senate is pending Monday; assuming it passes as predicted, Governor Chris Christie is expected to sign the bill after final passage in the General Assembly. You may recall that the Assembly version (A4225) was pulled last summer in order to avoid negative electoral consequences for potentially vulnerable Democrat legislative candidates. That baby is officially put to bed and all engines are a go…

Sweeney, Prieto and the other Trenton Democrats will now move to eat into Christie’s narrow but both symbolically and numerically significant victory among Latinos in the November general election.

To be honest with you (and I always am), your Blogger-in-Chief could get behind a one-time modified “DREAM act” IF, and only if, it was coupled with (1) real immigration reform and (2) entitlement reforms, too. Without’em, you’re simply erecting a bigger magnet for more status quo illegal immigration, and the status quo helps no one. The 1980’s taught us that no-strings-attached amnesty schemes succeed only in increasing illegal immigration. It’s a non-starter, or at least it should be. 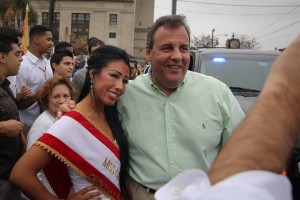 That’s why New Jersey should stay the hell out of it since a state doesn’t have much power to affect the variables underlying either of those points.

Injecting base politics into a problem requiring a thoughtful, measured, comprehensive solution will turn this “dream” into a nightmare in record time, folks. The cost could also prove substantial for taxpayers.

Governor Christie agreed with me, too, at least as late as 2011.

Responding to a question broaching the DREAM Act, he told the assembled guests at a Sayreville town hall meeting that, “I can’t favor that, because we need to have an immigration system where people follow the rules, and I can’t in a difficult time of budget constraints support the idea that we should be giving money in that regard to people who haven’t followed the rules, and take that money from people who have.”

The fairness dimensions doesn’t even really bother me. I challenge each and every GOP’er who’s prepared to sign off on this measure, including the Big Guy himself, to tell us what’s changed since 2011 other than the immanency of his presidential campaign and a general desire among battle-weary Republicans to shed the xenophobe label. I’m not expecting a substantive defense; only, perhaps, a cogent explanation of how capitulation on this issue will solve any of our problems?

10 thoughts on “Trenton’s Dream? Or Nightmare?”