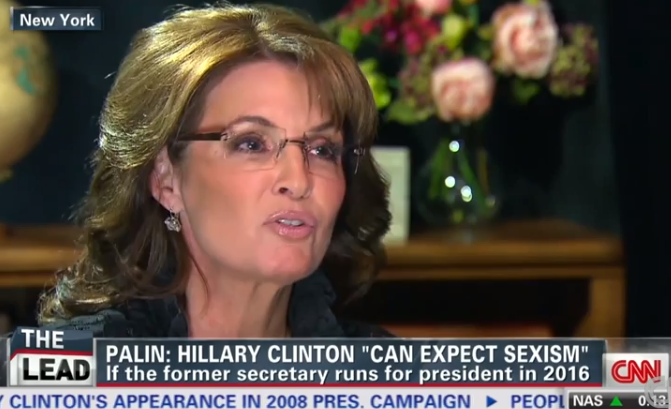 There are plenty of things that I could say about former Governor Sarah Palin’s new interview with Jake Tapper, Save Jerseyans (the comment about Chris Christie’s extreme weight was interesting; her comments about the Pope were aggravating). I land in hot water with some of you whenever I do. But I’ve got to live my life and you do, too.

For now, focus on Tapper’s McCain question at the 1:57 mark and Governor Palin’s answer:

Goodness gracious. Hypocrisy might be a better word than irony given her active support for GOP primary challengers across the country…

And I’m not saying that primary challenges are a de facto bad thing in all circumstances.

An obsession with ideological purity is harmful, however, and if any GOP’er were deserving of a primary challenge for the reasons expressed by proponents of that strategy, then one might argue it’s Senator McCain?

If she can “agree to disagree” with the man behind campaign finance reform, then why can’t she afford a similar level of tolerance and accommodation to the other targets of her Tea Party Express movement?

I don’t hate “Sarah.” She’s probably a lovely woman on a one-on-one level. She displayed some real guys in 2008. I agree with her on paper regarding the substance of the major issues. Just sayin’… doesn’t her lack of consistency on this McCain point belie her entire primary strategy?