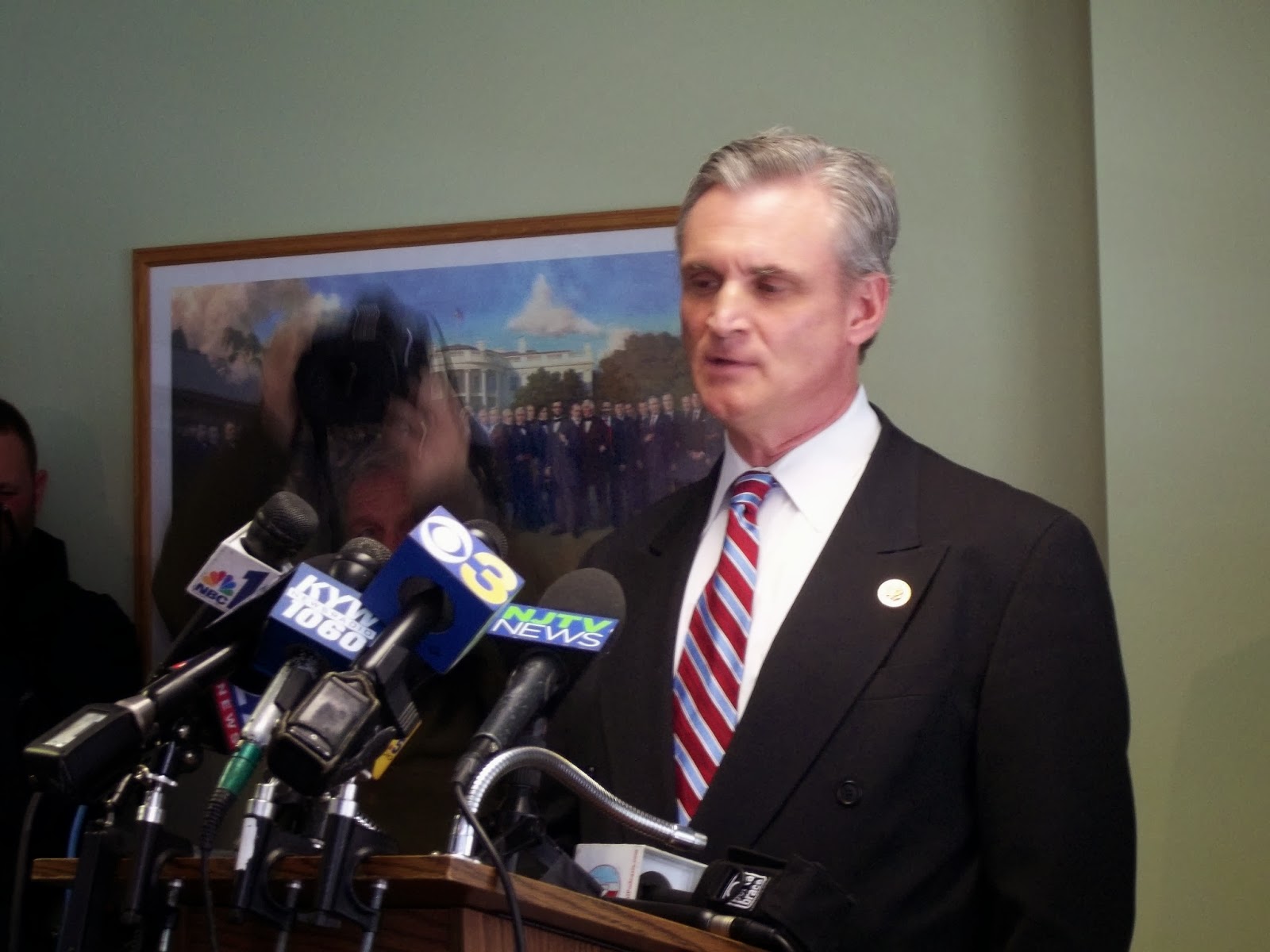 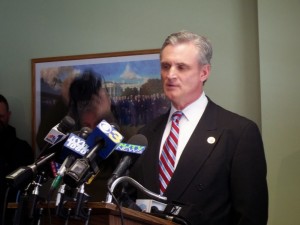 At his news conference announcing his resignation from Congress today Representative Rob Andrews (D-NJ) said he can “empathize” with New Jersey Governor Chris Christie because the governor “is in the vortex of some kind some kind of blood sport and that’s a tough situation to be in.”

Andrews said that everything that Christie does “is now scrutinized — everything he says, every move he makes. He’s being watched and covered so closely and that’s a difficult spot to be in.”

Andrews, who has been the subject of a House committee inquiry into alleged ethics violations said that he would not compare his situation to Christie’s and added that he didn’t want to get into a matter that is under investigation by the U. S. Attorney’s office. And Andrews stressed that he disagrees with Christie on a variety of issues. “But yes,” he added “I can empathize.” 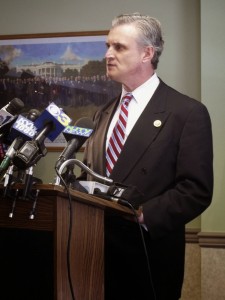 Andrews said he will be talking to the governor later today and he noted that the governor has the power to set the date for the primary and general elections to chose Andrews’ successor even though the Christie cannot appoint an interim successor. Since Andrews’ announcement comes midterm and so close to the regular date set for the primary many believe the governor will simply opt to go ahead with the regularly scheduled spring and November elections this year and not call for special elections.

Also in the news conference today, Andrews made the following observations and announcements:

–Andrews will be joining the public affairs devision of the prestigious Philadelphia law firm Dilworth Paxson where he says he and his wife have benefitted from the help and support of several friends and mentors “over a long period of time.”

–Andrews received the offer to join Dilworth last Friday after discussion back and forth with the firm. The firm made it clear that they would expect him to begin his duties in March and once Andrews decided to accept the firm’s offer, he knew he would have to leave Congress quickly. His resignation takes effect over Congress’ Presidents Day break.

–The congressman said he took a vote among his wife and children and the vote was 4-0 in favor of accepting the offer and leaving Congress. Andrews confirmed that some time ago he did have an offer from Goldman Sachs but decided to remain in Congress at that time. This time, the move seemed right, Andrews said.

–Andrews said the ongoing ethics probe “played absolutely no part — none” in his decision to leave Congress. Andrews added that “the voters of this district gave the clearest answer” to the ethics allegations “when they re-elected me overwhelmingly.” He noted that he’s been re-elected with what he called the largest number of votes for a member of congress in New Jersey’s history.

–Andrews said he had to consider his future and his earning power as he moved ahead into the next phase of his life. He said he will need a quarter of a million dollars “to put my kids through college” and suggested that this certainly had a bearing on his decision to move on. He also said he’s looking forward to spending more time with his family. “The most important title I have is the tile of ‘father,'” Andrews added.

–The congressman said he expects to be involved in who the Democrats slate as his successor and conjectured that Senator Don Norcross would make an excellent candidate. “I hope he runs and if he runs he will have my support,” Andrews said.

–Andrews had high praise for House Minority Leader and former Speaker Nancy Pelosi, citing her as a mentor and calling her “a force of nature.”

–Andrews defended Obamacare and said that once the kinks are worked out “it will be looked upon as a pillar of the middle class right up there with Social Security and Medicare.” He added: “I have no doubt about this.”

–Andrews said he doesn’t ever expect to run for public office again but he would not completely rule it out. “Leaving public office doesn’t mean leaving public life,” he explained. He said he expects to continue to be involved and certainly does not feel like he’s leaving his constituents “high and dry” since he’s served them for 24 years and his staff will remain in place serving constituents even after he leaves and until his successor is chosen by the voters.

–The congressman enumerated many of the accomplishments that he’s proudest of over the past 24 years but said the biggest accomplishment had been day-to-day constituent services — the thousands of people who have been helped by his office with a wide variety of matters.