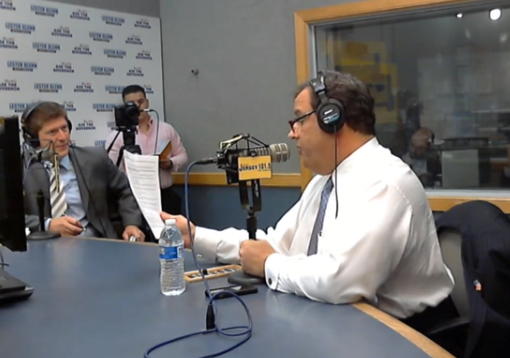 Governor Chris Christie issued a conditional veto on Thursday night to an arbitration cap proposal initiated by Democrats that would’ve killed the law’s true intent through exemptions. The State Senate subsequently voted 33-1 to concur with the Governor’s conditional veto and extend the 2% cap and prevent a sunset provision from kicking-in on April 1.

“Without question, the reforms to New Jersey’s arbitration system enacted in 2010 have been effective in controlling spending and helping municipalities limit property tax increases,” Governor Christie stated in his conditional veto message.  “Extending the successful and essential control on arbitration awards enacted in 2010 is therefore the sensible and logical course.”

You can click here to read the A-3067, Save Jerseyans, and here is a copy of the conditional veto.

The General Assembly passed a widely-panned version of a “cap” on Thursday by a vote of 47-22-3 but had yet to act on the Governor’s recommended changes.

What are the major post-CV changes?

Governor Christie also pressed the point that public employees affected by the law would, indeed, get another “bite at the apple,” and his CV would permit the public employer to negotiate a new agreement provided it adheres to the 2% hard cap.

Assembly Democrats rightly drew criticism for playing a dangerous game that could send property tax growth skyrocketing after years of decreased rates of increase. “The leadership in the Senate moved swiftly for a resolution, but I’m disheartened that the leaders in the Assembly have yet to indicate when the house will convene for a vote on the revised bill,” said said Asm. Declan O’Scanlon, a vocal critic of the Democrats’ approach, in a press release obtained by Save Jersey earlier Thursday.

The Monmouth Assemblyman has been the most-visible booster of a renewed hard cap in the lower chamber. “The sponsors claim to extend the cap with this intentionally misleading legislation, but instead they are effectively destroying the cap on arbitration awards, and starting down a slippery slope that will lead to the eventual collapse of the 2 percent cap on property taxes,” O’Scanlon remarked earlier in the day. “Provisions in A-3067 mean any contract expiring between April 1, 2014 and December 31, 2017 that had previously been negotiated at or below a 3 percent increase is exempt from the cap provisions. A second fine-print provision means for the rare contract that is still governed by the cap can be increased at a level that is 50 percent greater than a governing body’s ability to raise revenue.”

A lack of action by the Assembly will carry consequences for taxpayers. “The unions who helped write this bill are declaring victory,” O’Scanlon continued. “As it exists, this bill makes it impossible for municipalities and counties to hold property tax growth at the 2 percent cap without layoffs, the elimination of services, or freezing salaries of other public employees to pay for raises for the special interests protected by this bill.”