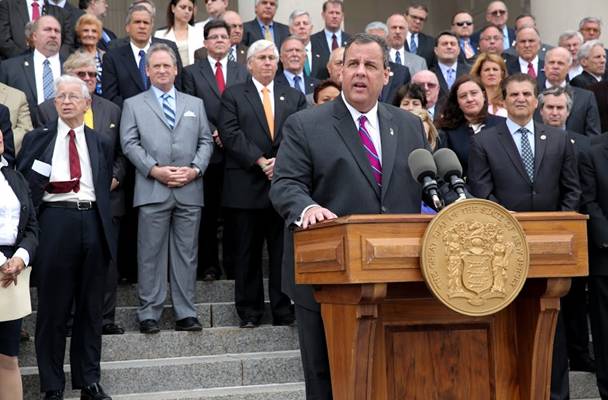 A who’s who of New Jersey Republicans and Christiecrats joined Governor Chris Christie on the steps of Trenton’s War Memorial on Monday, Save Jerseyans, all to demand Assembly action on the expired arbitration cap credited with keeping Garden State property tax increases to record lows. For example, whereas property tax bills increased on average by 2.4% and 1.6% in 2011 and 2012 respectively, those same taxpayers’ bills had rose by a minimum of 7% during the years between 2004 and 2006.

It’s a no brainer for everyone except Vince Prieto’s caucus.

County Executive Donovan: You can say if it ain’t broke, don’t fix it. We don’t want changes to it. Let’s keep going the way we were going and get back that cap. That’s important. Thank you very much everybody.

County Executive DiVincenzo: Let’s continue to move this state forward and pass this bill on behalf of the taxpayers of the entire state of New Jersey.

Governor Christie: We’re out here today just to make sure that the leaders of the Assembly know that we are united in this cause, and that we are putting politics aside in order to get the job done the right way, and we trust and hope that they will do the same thing. If they do, we’ll continue to see progress on property taxes in this state. If we don’t, we will go back to the bad old days of 70% property tax increases in ten years, or of such significant cuts to services that the quality of life in the towns and counties will be unrecognizable. Neither one of those are acceptable alternatives to me and not to the people that you see standing behind me. So I thank each and every one of them for taking time out of their schedules to be here today. I thank them for their support of these type of common sense measures and I thank them for their willingness to step across the aisle and work with each other to make sure we get the job done the way it needs to get done. There’s really one person left to make this judgment. The Speaker of the Assembly, if he posts this bill, believe me it will pass. It’s up to him now to decide what’s more important – protecting the taxpayers of this state or paying back old political debts. It’s up to him. I stand ready to sign the bill that I sent back and the Senate approved 33-1 and to give tools to the folks standing behind me for them to be able to represent the taxpayers of their individual municipalities and counties in a way that will make them proud. So thank you all for being here today. Thank you for your support and we’ll continue to work hard together. Thank you all.