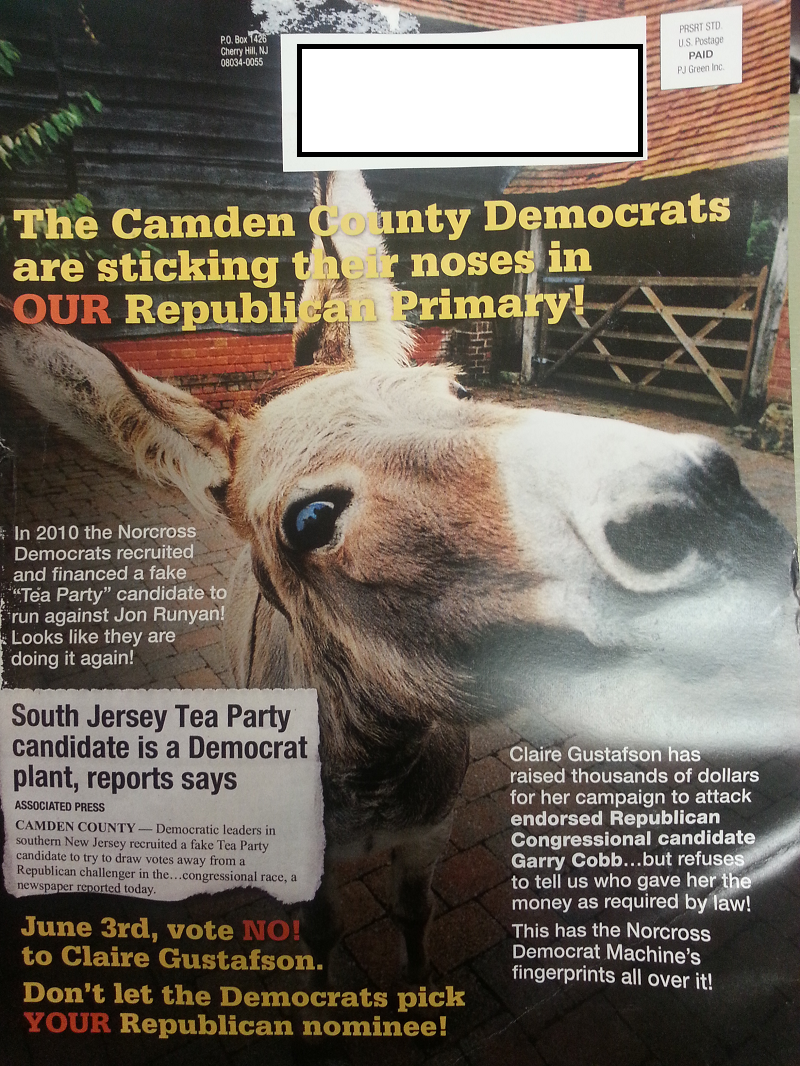 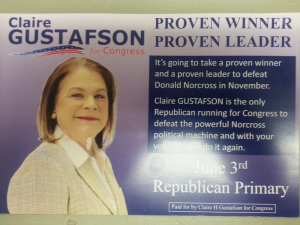 The worst crime imaginable among the Republican population of New Jersey’s First Congressional District? Being outed as a fake or “Norcross Republican,” one who is registered with the GOP but secretly (or not-so-secretly) in league with South Jersey’s notorious Democrat party boss George Norcross III. The fact that his brother, state Senator Donald Norcross (D-5), stands as Rob Andrews’s anointed successor in the Democrat column does nothing to assuage fears of Norcross interference on the other side of the aisle.

Paranoia? Not entirely without basis! Read this, that and here for all the validation you’ll need of my fellow South Jersey GOP’ers deeper and darker fears.

It’s therefore not all too shocking that the two primary contenders in this year’s race for the CD1 Republican nomination – former Philadelphia Eagle Garry Cobb and local business owner Claire Gustafson – are both actively accusing one another of conspiring with GN3.

The campaign has been ugly for weeks now with Gustafson launching aggressively personal attacks against the county-backed sports personality.

Cobb, who is receiving the assistance of veteran New Jersey-based mail guru Ed Traz in his quest to win a seat in Congress, countered by sending out two mailers over the last week (exhibit 1 and exhibit 2) alleging that Gustafson’s self-donation of thousands of dollars to her campaign had “the Norcross Democrat Machine’s fingerprints all over it!” 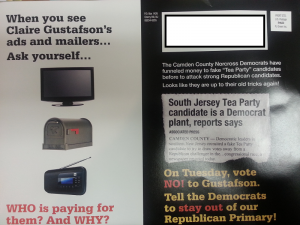 The Cobb camp’s literature questions where else their opponent could’ve come up with the cash for mail and even a cable TV spot. “Can you allow the Norcross Democrat Machine to fund my opponent so he won’t have to face me in the general election,” Cobb asks on the back side of his full-sized mail piece.

Gustafson, whose consultant is South Jersey operative and ’09 Christie campaign alum Steve Kush, countered by providing the Philadelphia Inquirer with a copy of a 48-hour FEC notice indicating that she had given herself the $12,600. The FEC has yet to post anything in its web portal.

“Disorganization, forgetting to show up at events and a lack of attention to detail caused me to start questioning Mr. Cobb’s true intentions in this race,” said Magnolia GOP Chairman Kevin Ehret, a Gustafson supporter. “Then, when his campaign started making the claim that Claire Gustafson was a Democrat plant I began asking myself if maybe Garry Cobb was really the Democrat plant.”

Welcome to Southwest Jersey politics, Save Jerseyans. Now you know why I prefer to remain engaged on the digital/news/commentary front of the fight…

And I already mentioned how “Norcrat” was the worst insult in CD1. A close second? Dallas Cowboy. Gustafson’s mail repeatedly (and humorously) refers to Cobb’s time with that NFL rival team rather than his years with the Eagles… know thy audience, right?