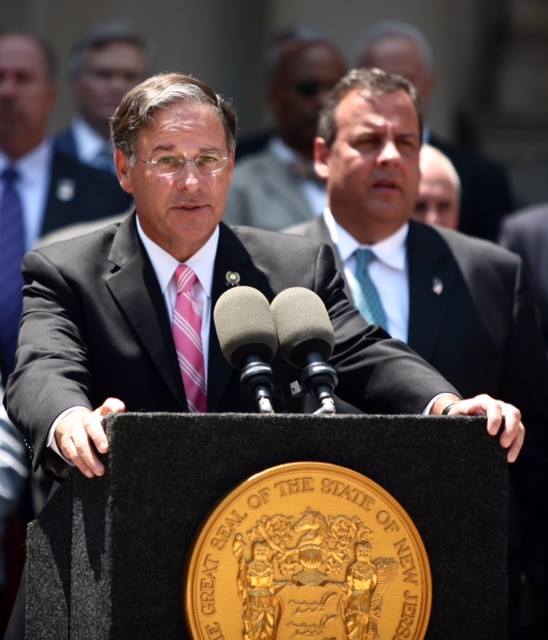 Governor Chris Christie and Assembly Minority Leader Jon Bramnick are usually lock-step on the legislative front, Save Jerseyans, or at least pretty close to it. That’s not necessarily the case when it comes to Texas politics.

Christie, who continues to serves as chairman of the Republican Governors Association (RGA), all-but declared Rick Perry innocent on Monday in a statement released by the national organization but stopped short of commenting directly on the indictment. “I have complete faith and confidence in Governor Perry’s honesty and integrity. And I’m sure that will be confirmed over time,” Christie declared.

Bramnick adopted a somewhat more circumspect approach as to Perry’s innocence but delved into the question of whether the indictment held any merit. “Although I do not agree with all of Governor Perry’s policy positions, I am a supporter of the American justice system,” Bramnick began in a statement transmitted by the Assembly GOP office. “The system should avoid any appearance of political retribution or political interference. There was apparently a history between the county district attorney and Governor Perry. Under those circumstances, an independent prosecutor to investigate the allegations should be appointed to review any alleged wrongdoing.”

This footnote was tacked-on to the end of the e-mail: “It appears that a funding issue of a government entity may be the basis for the indictment. Bramnick said if that is the case the public should be very concerned about this indictment. He added his concern of politicians investigating politicians may have reached a new level.”

Read my lips, Save Jerseyans: this is a simple issue. The indictment is bulls**t. Completely and utterly. Even Obama master strategist David Axelrod is on record referring to it as “sketchy.”

No one is alleging that Gov. Perry vetoed a spending item, something which is 100% within the province of an executive, with ample public warning that it was coming. Nothing happened in a dark, smokey room. It’s not being alleged that favors were traded or money changed hands. Rich Lowry’s NRO piece does a great job of summarizing what’s happening, and it absolutely STINKS to high heaven.

The quick version? Again, all of this boils down to a base Democrat attempt to criminalize successful Republican governing, silence a major critic of the Obama Administration, and silence a destroy a 2016 presidential contender.

Republicans need to be 100% united in our opposition to a Travis County DA’s egregious and dangerous abuse of the legal system.