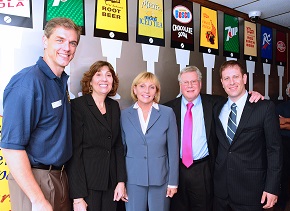 By Jay Webber | The Save Jersey Blog

I hope everyone had a relaxing summer and a great Labor Day Weekend. As we head into the Fall, I want to update you on some of my activities over the last few months.

Back in June I took a strong principled stand against the State budget proposal. I opposed the false choice of either raising taxes or deferring pension payments to balance the State budget. Instead, I called for across-the-board spending cuts to meet our pension obligations and to avoid raising taxes on the already over-taxed citizens of New Jersey. Making the legally required pension payment is the right thing to do for the people who work hard for the State of New Jersey for taxpayers, because not making the legally required pension payments today will cost us much more down the road. To view my comments on the Assembly floor opposing the budget click on the photo above.

On other legislative fronts, my New Jersey Tuition Equality for America’s Military (NJTEAM) Act, A-2622, was released by the Assembly Military and Veteran’s Affairs Committee on June 12. The NJTEAM Act allows veterans who attend a public college or university in NJ to pay for their education at an in-state tuition rate. Click here to read more.

To address the rising need for primary care physicians caused by the implementation of Obamacare, in May I introduced A-3250, which would exclude from income taxation money paid to doctors for seeing Medicaid patients. If enacted, the bill would give much-needed incentives for doctors who might otherwise turn down Medicaid patients because of the program’s reimbursement rates.

Near the end of the Summer I toured Sea Breeze Fruit Flavors in Towaco with Lt. Governor Guadagno as part of her NJ Tried and True Business Tour. The Sanders Family has been making syrup and beverages since 1925 (including George Costanza’s favorite, Bosco) for a total of four generations! Check out some of the photos below.