GOP Women out to rebut the ‘War on Women’ 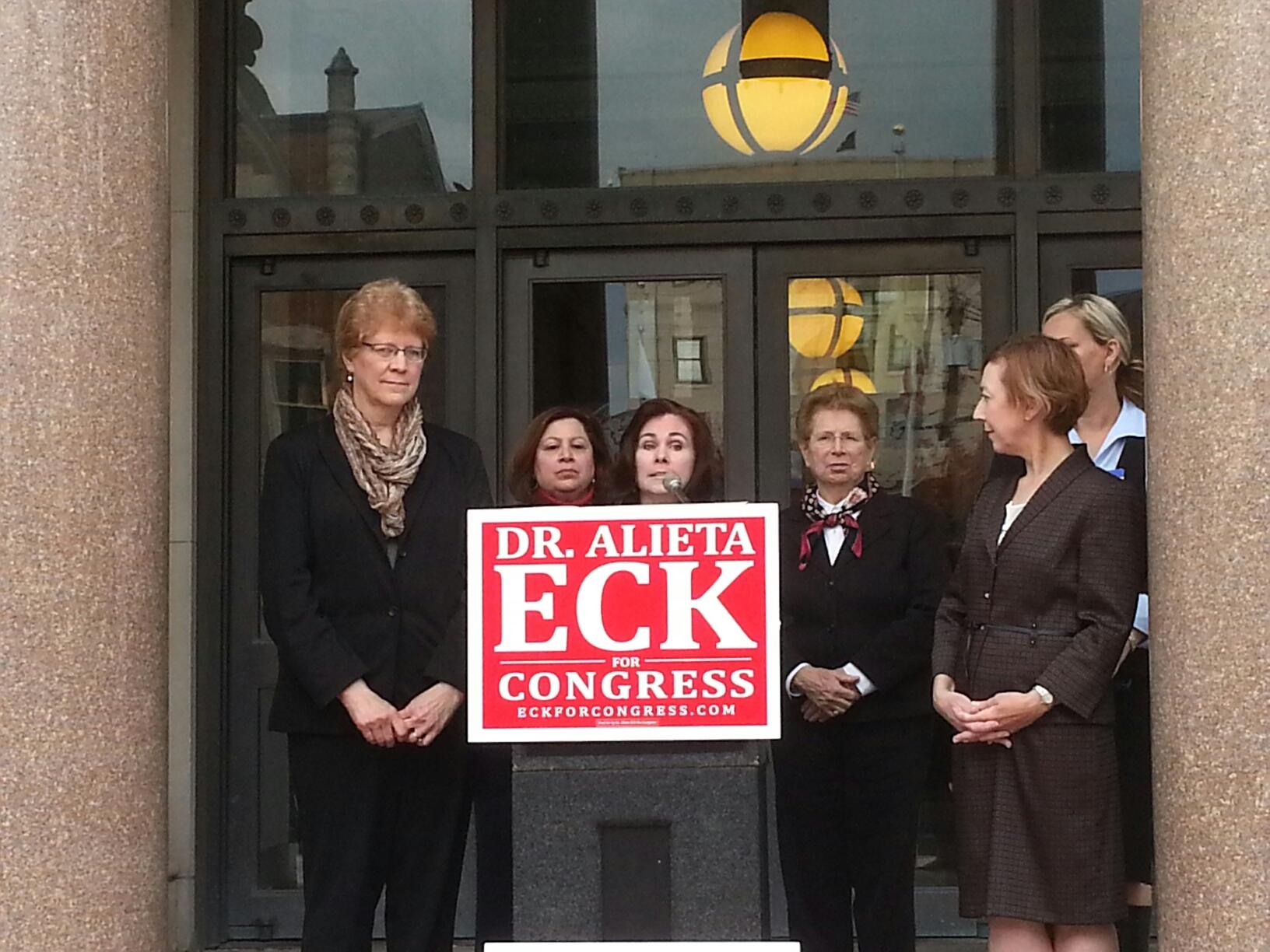 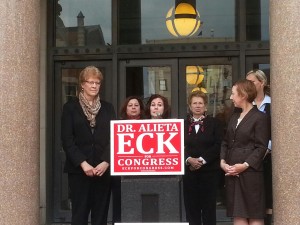 I was so happy to be invited to Dr Alieta Eck’s “Refuting the War on Women” press conference on the Trenton State House steps this week, Save Jerseyans.

Alieta Eck is a respected doctor who’s run the Zarephath Health Center, a free clinic for the poor and uninsured, serving over 40,000 patients since 2003. She is now running for Congress in District 12. Her opponent is one of those divisive politicians that we see too often in DC and she doesn’t care if she is using rhetorical talking points that are flat out lies to gain votes. Typical.

As we know, Democrats have continued to spread lies about Republicans since Obama and the Left first started their War on the Tea Party.

They figured out that if you repeat a lie often enough, eventually people will start to believe it. They, along with the media, were successful in labeling the Tea Party members as extremists even though there was never any violence at any TP rallies. But given that the TP catalyzed sweeping wins nationwide in 2010, the Left had to do something to combat this successful movement of smaller government and lower taxes. I could write a book about the many ways Obama and the Democrats went after their opposition, even using the IRS in the process.

But even rhetoric has its limits; currently, 6-in-10 Americans say they cannot trust the government in Washington to do what’s right. So if that’s the case, why do we keep sending those spending addicted, divisive, lying, corrupt and self-serving big Government types to D.C. to represent us?

Alieta’s opponent, Bonnie Watson Coleman, is one of those politicians that we can’t send to represent us. I along with many other Americans worry for our children’s future in this country, now more than ever, and it’s critical to be informed and choosy when we vote.

Alieta Eck is a respected doctor and decided to hold a press conference due to Watson’s claim that Dr. Eck is somehow against Women’s health care (despite the fact that only Dr. Eck has a history of providing it). “How can this be when I run a Non-Government free clinic where half of my patients are women? I see women who have Medicaid, which costs taxpayers $13 Billion, yet does not provide access to primary care physician,” said Dr. Eck. “I see women who are placed on expensive medication they can’t afford. We do our best to help each one. We don’t discriminate, and care for every race and creed, gay or straight- delivering the same care we would give to our own families.”

How can Bonnie Watson Coleman with a straight face say she is part of a “War on Women”? Alieta Eck has a private practice, is a mother of five and yet she still finds the time to volunteer for the uninsured and people who need care in her free clinic.

You know who makes up stories to grab headlines like that? That’s a woman who blindly follows the Obama agenda of divisiveness and portraying the GOP as cold-hearted people who don’t care about women. Obama and the Democrats may have won the first part of that war, but they divided, and hurt our nation in the process.

Currently we have a record 46.2 Million Americans on food stamps. That’s more dependents than in the work force full time. This trend has caused more women to be dependent on help to keep their families afloat. To deflect from this big failure, Democrats like Bonnie Watson Coleman are using the shady campaign tactic of blaming the Republicans with rhetoric that is simply untrue.

We need to re-think the quality of people we send to D.C. Be wary of politicians that promise the world while our economy is struggling and our national debt is at an all time unsustainable high ($17 Trillion). Not to mention that we have the albatross that’s ObamaCare hanging around America’s neck and we still don’t know the full affect it will have on the economy.

Alieta is a Health Care professional and is in this race for all the right reasons. She is not a career politician. She is simply looking to help Americans, and change the direction our country is headed.

Americans don’t want full blown Socialism. I lived in a country like that for 20 years, Save Jerseyans, and I have seen first-hand the cost of having the government involved in health care. I have seen how the elderly get put on a 6-12 month waiting lists for surgeries that you could schedule within a month here in U.S. I have seen children denied procedures and antibiotics because the Government didn’t deem it necessary, yet my children had the same procedures here with no problems or wait. I have seen women have to wait 3 months+ for an appointment with a specialist. I am speaking of an oil rich nation, by the way, that doesn’t have fiscal issue.

Imagine when the full cost hits our nation. Our $17 Trillion national debt will be a walk in the park in comparison!

I fully trust Dr. Alieta Eck and I would love to see her representing CD-12 and proposing common sense solution to our future health care issues on the House floor. You know that there will be many. They forced through a 1,200 page Bill (one that they had to pass before we could see what’s in it). I think it may be years until we know the true impact of the rushed-into-law-Obamacare package on women and families. When that day comes, I want Dr Alieta Eck to be there to help fix it.

Some of Dr. Alieta Eck’s best points from the press conference this week are re-posted for your enjoyment and benefit below:

How is the Democrat Party and our current Government waging the real war on women?

1. Take the Affordable Care Act- because of this law; women are finding that their jobs are being cut from 37-29 ½ hours per week, and especially cruel fact that adversely impacts single Moms who are already struggling. The ACA is killing jobs and the economy.

THAT is a War on women.

2. Because of ACA, women are being denied access to the doctors they have trusted for many years. They are being herded into Health plans with higher premiums, higher deductibles—plans that are unaffordable.
THAT is a war on women.

3. Because of ACA women are being limited in their choices of medicine and services, only getting what the Government, not their Doctor deems necessary.
THAT is a War on women

4. The policies of the Democrat party are causing NJ to have the highest cost of living, the highest per-capita debt, highest foreclosure rates- Its causing people to flee NJ. The other day I stood in a train station and listened to 2/3 of the people tell me they now live in PA because they cant afford to live in NJ

THAT is a War on women who love NJ and want to see their children and grand-children thrive here.

No Republicans voted for this law, which passed before anyone read it. Congressmen Pallone and Holt Championed this law, and this was a major reason why I entered into this race.