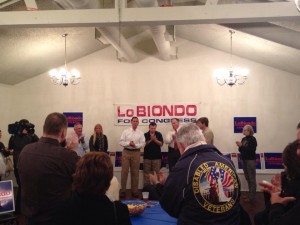 That’s the finding of the Monmouth University Polling Institute in its new poll of NJ-02, Save Jerseyans, where Republican incumbent Frank Lobiondo (56%) leads Democrat challenger Bill Hughes, Jr. (35%) by a whopping 21-points.

His opponent’s weak party support (only 76% among Democrats) tells most of the story in this Cook PVI D+1 district. “LoBiondo has held his seat for two decades because of significant crossover appeal in a district that otherwise trends Democratic,” said Patrick Murray, director of the Monmouth University Polling Institute.

Democrats (including Nancy Pelosi herself) had hoped Hughes might be able to leverage his family name (he’s the son of Lobo’s predecessor) to shake things up in South Jersey.

It’s not panning out for them if these polls are accurate.

ICYMI – other Monmouth October polling found NJ-03’s Tom MacArthur (+10) and NJ-05’s Scott Garrett (+5) also ahead of their adversaries but by nowhere as large of a margin despite the stronger Republican orientation of their respective districts.

TMac is running for an open seat. The possible differences between the respective polling positions of Lobo and Garrett? Besides what Murray discussed in his press release, Lobiondo has been much more aggressive with his opponent in terms of using negative/contrast techniques to define Hughes early and often. Spare the rod and spoil the child…