Christie in Canada: Obama Keystone XL Stonewalling is “No Way to Treat a Key American Ally” 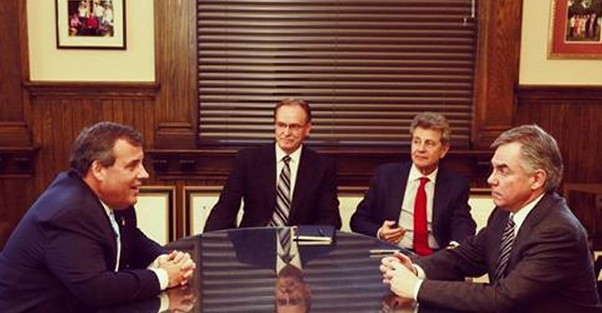 Gov. Christie dropped by the Calgary Petroleum Club on Thursday at 1:00 p.m. Mountain Time, Save Jerseyans, to address guests of the Calgary Chamber of Commerce and TD Bank on American-Canadian relations and energy policy.

This is a trade mission. It’s also a major opportunity for a presidential contender to talk about a presidential topic (the Keystone XL pipeline) and create some contrast between himself and an unpopular president.

His remarks, as prepared for delivery:

In no area are the benefits of adopting that “roll up our sleeves and do the hard work” more clearly significant than in the area of energy.

As you here in Calgary know better than most, and thanks in part to your investments and your hard work, North America is in the middle of a once in a lifetime energy renaissance.

You know the numbers. Canada’s continuing investment in energy has paid off. Oil and gas today accounts for 19% of Canada’s exports, and provides over 550,000 jobs in this country.

Canada is spending some $69 billion a year on capital expenditures in the field.

And Canada is also 5th in the world in natural gas production, with 6 trillion cubic feet per year.

The 168 billion barrels of recoverable resources from Canada’s oil sands constitute well over 100 years of production – and that is with current technology.

In part as a result of all this, Canada is the United States’ largest and most reliable supplier of energy. Canada exported over $110 billion worth of energy to the U.S. last year. (I should perhaps note that the trade was two way – the U.S. exported $22 billion in oil, gas, and electric power to Canada as well.)

In the United States of course, we have our own flourishing resource. Thanks to the deployment of new technologies like directional drilling and hydraulic fracturing over the last few decades, we are now in the midst of a full blown “shale gale”.

The EIA says that crude oil production from tight oil and shale will nearly double to 4.8 million barrels a day in the next four years – and it has already quadrupled since 2008.

The boom of course has been so profound that many producers here and in the U.S. are having to adjust to deal with this much lower price environment. It hasn’t been easy in all areas of the oil and gas patch in either country.

But the energy boom has already improved industrial production, and helped bring manufacturing back to North America. In all three countries, we have become more cost competitive. In fact, the commerce department calculates that the U.S. has created over 700,000 new manufacturing jobs in last four years.

For most of my lifetime, ensuring reliable energy supplies has been a major economic and geopolitical concern of the United States. Now, imports are dropping fast — from 60% of liquid fuels consumption in 2005, to 40% in 2012, to about 33% today. North America as a continent is becoming increasingly self sufficient and cost competitive.

And in the otherwise weak recovery from the recession we have had in the United States, energy has been a bright spot in terms of creating jobs. The Analyst Dan Yergin estimates that the shale revolution today supports over two million American jobs.

Suddenly, after worrying for decades about energy imports, the United States is joining Canada in making plans for export.

By the way, it should be said that this increased production has occurred in an environmentally responsible manner.

First of all, along that 5,000 mile border I mentioned earlier, there are dozens of national and hundreds of state-provincial agreements on protecting our shared environment.

Second, with respect to greenhouse gases, according to the EIA, the United States has cut its Co2 emissions by 10% from 2005 to 2012, bringing emissions to their lowest level since 1994. Many nations may talk about cutting greenhouse gas emissions, we’re actually doing it.

Thirdly, there are over 280,000 Canadians today working in renewable energy industries. So Canada truly does have an “all of the above” energy strategy.

Finally, we should say this clearly to some of the critics: time and again, experience has shown that the surest path to a cleaner environment is through economic growth – successful economies do a better job protecting the environment.

In any event, today North America has the fastest growing oil production outside of OPEC and a cleaner environment, with emissions of various criteria pollutants (in addition to Co2) going down.

So let’s be clear: the North American energy renaissance has made us all better off, from multiple perspectives – economically, strategically, and environmentally.

The real question is what can we do, as a matter of policy, to bring this renaissance to full flower?

And there are some obvious needs. The first is a continuing and major investment in infrastructure – both cross-border and within our countries.

I know that premier prentice was in eastern Canada earlier this week extolling the benefits to consumers in Ontario and Quebec from a pipeline to the east. We have similar needs within the United States.

That brings us, of course, to the major debate on the Keystone XL pipeline.

I have made my view on this clear.

My view is that we are missing an enormous opportunity when we delay its development.

Today, there are already some 29 gas and 17 oil cross-border pipelines in operation. That’s right, there are almost four dozen pipelines carrying oil or natural gas across the U.S. – Canada border right now.

The State Department’s own environmental impact study concluded that they are safe, and Keystone would be safe.

And let me quote directly from that same study, issued earlier this year: “A total of 42,100 jobs throughout the United States would be supported by construction of the proposed project.”

That’s right, the administration’s own State Department says Keystone would create 42,000 direct and indirect jobs. Yes, many temporary, many in construction or support functions. But what am I missing — is there not a need for increased employment in the United States today?

Keystone has now languished for six years. And I think this sends a very unfortunate signal.

First, it reduces the willingness of investors to make significant investments in large scale, capital-intensive products that are needed to help our energy reach its customers. Here in Canada, by limiting the ability of increased production from the Canadian oil sands to get to market, it stunts production and growth.

Secondly, this is no way to treat a key American ally.

This is not about sending “your oil” across “our land”. It’s about maximizing the benefits of North America’s natural resources for all, about allowing markets to function, and about contributing to the prosperity of citizens of both the United States and Canada.

Our leaders’ comments on this topic should not be marked by parochialism, but by principles. And the principles should be enhancing the economic competiveness of North America, treating allies with respect and fair consideration, and creating jobs, growth and opportunity for all.

Approving Keystone would actually drive down the price of oil and help consumers in all North American countries. It should be done today. It is supported by majorities in both the House and the Senate.

As I said earlier, a key goal in the U.S.-Canada relationship should be getting stuff done that is in our mutual interest. It is time to get this done.

More broadly, the lack of pipeline infrastructure means that much of both of our country’s increased production is being shipped by rail, or by trucks. That affords flexibility, but it is not without risk, or without higher costs.

Keystone is perhaps the most visible pending energy project on our continent, but it is far from the only one. As a general matter, we need to reduce regulatory uncertainty and increase the speed and transparency of the American project approval process.

All kinds of value-added facilities, like chemical plants are being delayed, because they require a significant long-term investment that is too often delayed by the permitting and regulatory process. Over the long term, this lack of regulatory predictability hurts job creation in the U.S.

In the last few months, I have also outlined other steps that I believe can enhance our energy future:

· Opening the global market for United States crude and taking steps to develop and promote the capacity for LNG exports;
· Adopting a reasonable approach to regulation that places an emphasis on cost-effectiveness, fair competition among fuels, and avoids picking winners and losers for political reasons;
· Investing in technology and energy research and development, in everything from renewable fuels to advanced recovery techniques to clean coal to carbon sequestration;
· Adopting an approach that will lead to careful chemical handling, well integrity and sound water treatment in the fracking industry; and
· Recommitting to the process of North American economic cooperation to ensure a more smoothly functioning and cost-effective energy supply network across borders on this continent.

1 thought on “Christie in Canada: Obama Keystone XL Stonewalling is “No Way to Treat a Key American Ally””