A Nation of Disconnect

When President Barack Obama first uttered the phrase, “If Congress won’t act, I will,” he declared war on the U.S. Constitution, Save Jerseyans. 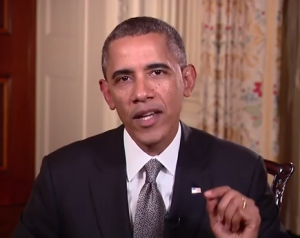 Obama supposedly remains bound by the Constitution, and swore twice (on two separate Bibles) to uphold it. During an episode of the Odyssey Radio Program in Chicago, on their public radio channel back in September of 2001, he revealed that the Constitution is, in his eyes, essentially a flawed document and that its framers had “blind spots” when creating it.

This is a man who, in a 2001 radio interview, said the Constitution was a “charter of negative liberties, full of constraints imposed upon us by our Founding Fathers.”

In March of 2008, he complained “[t]he biggest problems that we’re facing right now have to do with George Bush trying to bring more and more power into the executive branch and not go through Congress at all, and that’s what I intend to reverse when I’m president of the United States of America.” Then proceeded to extend or keep many of his policies.

Since being elected, he has continued to reject the Constitution as a fundamentally flawed document. Consistent with this attitude, he has violated its core provisions at every turn, launching unauthorized wars, rewriting legislation without Congress’ input, and to the point of creating new laws.

It’s not just a passive disdain for the foundations of our system; Obama views the Constitution as a flawed document from which we must “break free.” He believes that it should refocus from “negative rights” by requiring income redistribution from the Haves to provide “positive economic rights” to the Have-Nots.

He believes government can’t get away with seizing as much property to redistribute to our constituency because the Founding Fathers tragically wrote a Constitution that limits the ability of federal and state governments to violate your liberties at will.

The 2001 Obama openly conceded that positive economic rights and redistribution are part and parcel of the same package. The 2012 Obama argues for positive rights to income, jobs, health care, food, and other transfers without admitting they require massive redistribution. Instead, he infers they can be covered by those who do not pay their “fair share.”

What he fails to realize is that all men are created equal, since every man, and woman was “created” in the same way, through inception in the womb. Equality of rights (and opportunity) is not the same thing as a guarantee of outcome; it certainly doesn’t mean that everyone is entitled to what everyone else has, nor do we believe that everyone is equal in their abilities.

We, as a people, are entitled to pursue happiness, but not mandated to ‘give’ happiness or assured of achieving it.

I’d like to say this is an honest ideological disagreement but it’s much more sinister than all that.

On June 15, 2012, Obama announced his Deferred Action for Childhood Arrivals policy for illegal immigrants. Under DACA, those who could produce some evidence that they came to the U.S. before they were 16 and had been in the country for at least five years would be given “deferred action” status, which allows them to obtain a work permit, get a social security number, and a driver’s license. An end run around Senator Robert Menendez’s Dream Act which, by the way, failed to pass the Senate and never even got a vote in the House in 2010.

How could Obama get away with enacting a law that Congress never passed?

He assisted the rebels in Libya and Egypt, bypassing Congress, and allowed (or encouraged?) the IRS to target Tea Party and other conservative groups that opposed him. He did this in much the same way King George retaliated against his subjects that opposed him. Obama abuses the Environmental Protection Agency because he could not get Congress to go along with his climate control agenda.

Just when did the Constitution grant the president the right to make laws and regulations without the consent of the People via Congress? Exit center stage.

Clinton allies say that if the former secretary of State does in fact announce a second bid for the presidency this year, they expect that she’ll tether herself to a main slice of Obama’s legacy.

Tim Miller (Executive Director for America Rising) says, “[s]he has no choice but to own the Obama economic agenda because she has been in lock-step with him on it ever since 2008.” Miller goes on to say “[h]e took her healthcare plan and then she whipped votes for it, there is no path for her to distance herself from him on it.”

Enter stage: Right New Jersey Governor Chris Christie who will need to distance himself from Obama and Hillary if he wants to win the primary, let alone the general. He will need to demonstrate how he intends to defend the Constitution, where he differs on illegal immigration, and where he stands on Obamacare.

Needless to say there will be a long list of contenders for holding the highest seat in the republic. There won’t be a single resume that will meet all the criteria of America’s voters; there will not be a single speaker that can meet all the requirements of a diverse nation.

It has been a difficult road over the past several years, Save Jerseyans, marked by near constant discord; choose wisely for the change you seek!

If you truly desire transformation, keep in mind the old Chinese proverb: “I dreamed a thousand new paths; I woke and walked my old one.”

If you want a new path, choose the best candidate that will take you in a different direction, the one candidate who can bring back a united nation – not put it asunder. If you do nothing, you surely will find yourself on the same path.

1 thought on “A Nation of Disconnect”