No, Marie Harf, You’re Not Smarter than Everyone Else 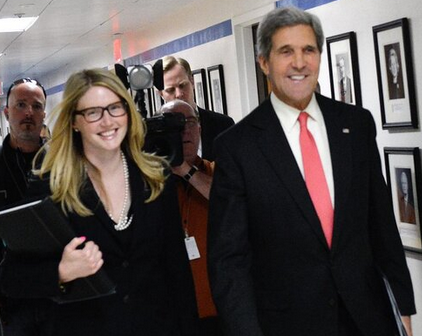 Over the weekend, United States State Department Spokesperson Marie Harf appeared on MSNBC’s Hardball with Chris Matthews and set off a firestorm with the following comment about ISIS terrorists in the Middle East:

We’re killing a lot of them and we’re going to keep killing more of them. So are the Egyptians, so are the Jordanians. They’re in this fight with us. But we cannot win this war by killing them. We cannot kill our way out of this war. We need in the medium to longer term to go after the root causes that leads people to join these groups, whether it’s lack of opportunity for jobs. We can work with countries around the world to help improve their governance. We can help them build their economies so they can have job opportunities for these people.”

Some have said that Harf’s comments reeked of ignorance and stupidity, and they do, but the problem is that they reflect the administration that has made her a spokesperson to represent their twisted worldview.

You see, in Liberal Land, liberals believe that the world only exists as they see it and they don’t see Middle Eastern terrorism as a problem with Islamic Jihadist extremism.  This is why the Obama Administration:

I could go on and on, but what’s the point? In the worldview of American liberals, the problem in the Middle East is that there are simply not enough jobs.

Of course, after six years in office, this administration has proven then they have no idea how jobs are created.  They believe that government spending creates jobs, which has been proven time and again to be folly.  Recently, the declining price of oil has given Americans more disposable income, which has resulted an improving economy.  This, of course, proves that tax cuts would help our economy because it would put more money into the hands of the very same consumers that have been spending our economy into prosperity with the money they’ve saved as a result of reduced fuel prices.

As I wrote two weeks ago, America has a history of being a noble nation that has helped rebuild vanquished nations.  We had a great opportunity to really help the people of Iraq in rebuilding at the end of the Iraq War six years ago, but Barack Obama was adamant about removing troops from Iraq against the better judgment of our military leaders, who predicted, rightly, that a leadership void would give terrorists the opportunity to create a terror state.  Somehow, Ms. Harf must have missed that when she concluded her remarks by saying, “We can help them build their economies so they can have job opportunities for these people.”

That opportunity, Ms. Harf, was thrown away by your president his Secretary of State, Hillary Clinton a few years ago.

Obama, meanwhile, blames his predecessors for Iraq, stating that we should never have deposed of Saddam Hussein.  Yet, Obama somehow decided to overthrow Libyan dictator Muammar Gaddafi, creating another void which is being filled by Islamic terrorists.  Thus, when Obama blames Bush for the present state of Iraq, he’s essentially saying that he was too stupid to learn from that experience because he did the same thing in Libya.

Of course, when Ms. Harf was roasted by conservative columnists and commentators over the last 24 hours, Harf announced that her comments were “might be too nuanced an argument for some,” because she feels that she’s just smarter than some of us and we clearly just don’t get it.

But we do get it.  From the Sirhan Sirhan’s assassination of Bobby Kennedy and the murder of Israeli athletes at the Munich Olympics in the late 1960s and early 1970s to the recent attacks in France and the beheadings in Egypt, Muslim radicals have been waging war against Americans, Christians and Jews for decades and it has nothing to do with jobs.

It’s time that the folks in Washington wake up and realize that they are either woefully and criminally ignorant or simply stupid.

2 thoughts on “No, Marie Harf, You’re Not Smarter than Everyone Else”