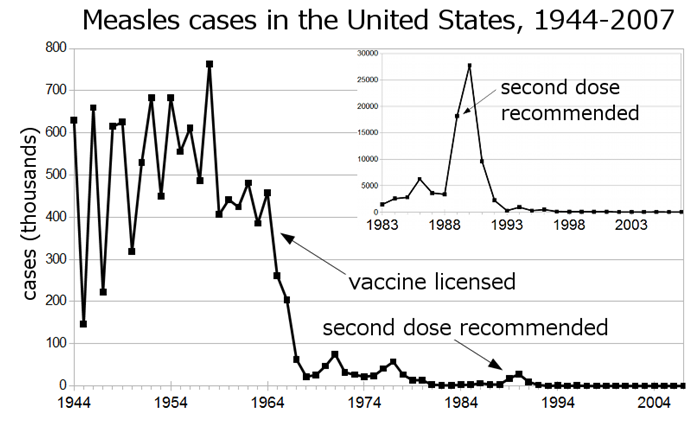 This is PART FOUR of a multi-part series on an important topic, Save Jerseyans.

Herd Immunity and the Unvaccinated

But if vaccines are safe and effective, why should the vaccinated worry about the unvaccinated? Isn’t it enough to live and let live – be vaccinated if you want, but let others forego them at their own risk?

It’s not that simple, Save Jerseyans.

While vaccines are remarkably effective, they don’t always take. It’s estimated that they work for 85-95 percent of those who receive them, but nothing, not even vaccines, are a 100 percent winner. The result:

During an outbreak of a vaccine preventable disease, an unvaccinated child can increase the risk of disease for everyone that may be exposed, even if the people who have been vaccinated vastly outnumber those who have not.  It is not uncommon for a small portion of the vaccinated population to be infected…

In other words, a chain is as strong as its weakest link.

The more technical term for that chain is “Herd Immunity.” Here’s how it was described in The Wall Street Journal:

When large segments of a population are immunized against measles, it reduces the risk of exposure for everyone in the community, including families who refuse vaccines. The concept is called herd immunity.

But when too many healthy people forgo vaccinations…the whole herd becomes more vulnerable, not just those who skipped shots. Without vaccines, measles and other infectious diseases can proliferate, and people who were previously protected may become imperiled.

The issue with measles is that now so many people avoid vaccines for religious reasons or other personal beliefs the magic number for protecting the herd—a vaccination rate of 92 to 94% for measles—has been compromised in parts of the country. It’s a serious concern among health experts.

The more people in a group who vaccinate, the greater the protection for the entire group.

But when some refuse vaccination for themselves or their children, they expose the group to the threat of disease since, within the group, there will be persons whose vaccinations aren’t effective or who can’t be vaccinated for whatever reason. The chain gets weaker.

For herd immunity to be effective against measles – percentages vary depending upon the disease— the vaccination rate must meet or exceed 90 to 95 percent.

But numbers can be deceiving. In California, vaccination rates statewide approach the national average. But some communities within the state fall well below the minimum standards to establish effective herd immunity. Not coincidentally, these communities, many of which are in California’s Orange County and the San Francisco Bay area, are anti-vaxxer strongholds.

One thought on “Herd Immunity and the Unvaccinated”