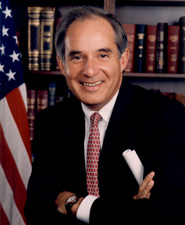 Former senator Bob Torricelli wants back in, writes Tom Moran. He’s kidding, right – or has The Star-Ledger been taken over by the satirical website, The Onion? Torricelli was run out of New Jersey politics for good reason, and he shouldn’t be allowed back in no matter how much Moran fawns over him. The people deserve better.

Torricelli’s use of his office to advance the interests of a campaign donor who showered him with what Moran calls “a slew of lavish gifts” netted out in him being forced to abandon a 2002 re-election bid. Good riddance.

Moran conveniently omitted mentioning 2007 reports of Torricelli’s use of senatorial campaign funds to grease the palms of politicians in a position to advance his business interests, including disgraced and now-imprisoned former Illinois Gov. Rod Blagojevich.

Torricelli was the product of a New Jersey political system that breeds corrupt politicians like rabbits. His unrepentant, unbridled arrogance deludes him into thinking he has “a final act.”

Instead of recycling shady Torricelli, serve the people by insisting upon scrupulously honest men and women who don’t see public service as a source of “lavish gifts.” Demand reforms to the system to run the Torricelli’s of this world out of public life once and for all.