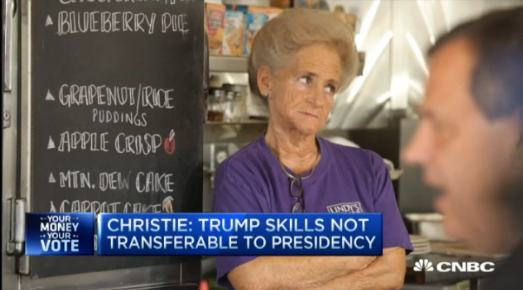 I’m not sure that the no nonsense-looking waitress watching his conversation with John Harwood agreed, Save Jerseyans, but Chris Christie‘s message from New Hampshire was loud and clear this morning: Donald Trump wouldn’t make a good nominee… or president. In his opinion.

“It’s not just about growth. You still have to deal with the facts,” he continued.

Christie also took issue with the applicability of the Donald’s business skills to the job of a successful nominee:

Not everyone agrees. At the moment, Trump leads Christie by 20-points in the Granite State.

The Donald, for his part, didn’t respond directly but issued a general reaction to GOP critics earlier Wednesday via Twitter not long after the Christie interview aired:

So many people who know nothing about me are commenting all over T.V. and the media as though they have great D.J.T. insight. Know NOTHING!

19 thoughts on “Christie dumps on Trump during diner stop interview”