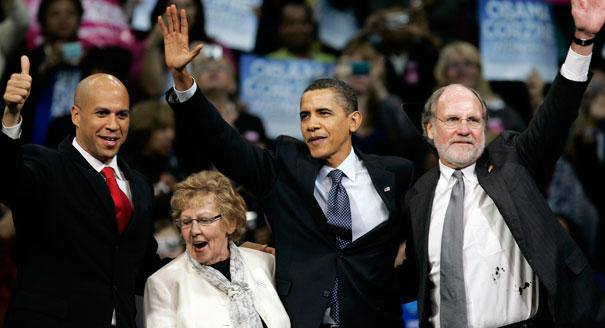 Cory Booker (D-Twitter) is taking a break from legislative love and governing-by-rainbow today to do what his party does best, Save Jerseyans: make shit up for self-serving reasons.

Distorting history in this case:

Know your facts – it was George Bush who instituted the asylum rules for Central American kids coming across border. https://t.co/CJJVo2HfAq 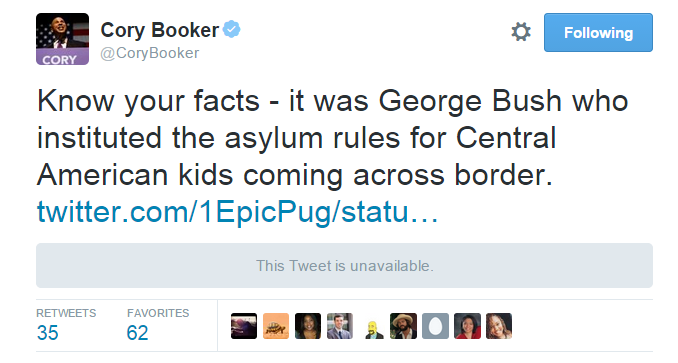 I can guess why.

Senator Booker is undoubtedly referring to the William Wilberforce Trafficking Victims Protection Reauthorization Act of 2008 which George W. Bush signed into law shortly before leaving office. This bi-partisan legislation impacts the deportation of children who enter the United States without authorization from countries other than Mexico and Canada who are victims of human trafficking. Unpacking that issue is more complicated so, necessarily, the process for return is less straightforward than for kids from, for example, Mexico.

The well-intentioned law change is a convenient excuse for the Obama Administration and its liberal allies who conceive of illegal immigration as just another Democrat Party voter drive. “The Obama administration says the law is partly responsible for tying its hands in dealing with the current influx of children,” parroted The New York Times. The TV stations have also reported the Bush-is-to-blame narrative as fact. It’s familiar, easy and convenient.

Here’s the truth: few decision-makers back in 2008 were anticipating the Obama administration’s blanket grant of amnesty.

Those cumulative, lawless executive acts, pursued in an election year to win votes, which despite what they tell you were absolutely unprecedented in American history, encouraged Central American parents to violate anti-trafficking rules to smuggle their kids into our country. And understandably, for what what it’s worth. But that’s not the point. What is: the Obama Administration engendered an unintended consequence of the 2008 law by incentivizing human trafficking. The fact that no one denies is the extent to which this wave of unaccompanied minors rose dramatically in 2012, not before as one would expect if the 2008 Bush-era law were to blame.

Is mom to blame for a ruined supper because the kids stuffed themselves on ice cream? When it was dad who encouraged them to gorge on it, all afternoon, while mom was out of the house? Give me a break.

So you can stop lying, redirect your tweeting energies and start talking solutions any day now, Mr. Senator. Revisionist history is no less abhorrent and unhelpful when it’s delivered in 140-character doses.