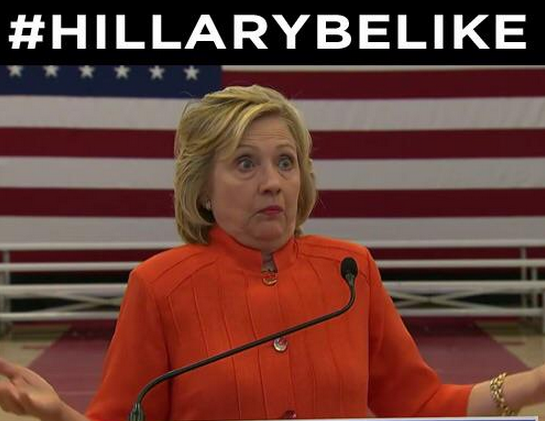 The Internet is an unforgiving place, Save Jerseyans, especially for politicians. Every gaffe is mercilessly dragged out as far as it will go to the entertainment of political nerds who spend way too much time on Twitter.

This is why we love the game! For sheer entertainment value if nothing else.

So what’s bringing this on? I’m glad you asked! Not sure if you’ve seen the video, but Hillary Clinton is currently trending on the Internet after what can only be described as her worst press conference… ever. The “Hillarity” doesn’t stop there though, folks. As all shining moments rife with soundbites should, this one has found fame for Mrs. Clinton on social media. If you watched the video, you already know exactly what I’m talking about, but just in case:

Mrs. Clinton: I don’t. I have no idea, that’s why I turned it over.

Mr. Henry: You were the official in charge of it. Did you wipe the server?

Mrs. Clinton: What? With a cloth or something?

Yeap, that’s a direct quote, complete with a big old ¯\_(ツ)_/¯ to go along with it. So, in true nerd style, we have decided to bring you a compilation of the internet’s best reactions to Hillary’s #withacloth shoulder shrug.

And for the grand finale: the House Conservatives Fund is running a caption contest for their #HillaryBeLike meme…

Send us your best #HillaryBeLike captions and we'll RT some of our favorites! #tcot #gop #StopHillary pic.twitter.com/EJLRfoPdaK