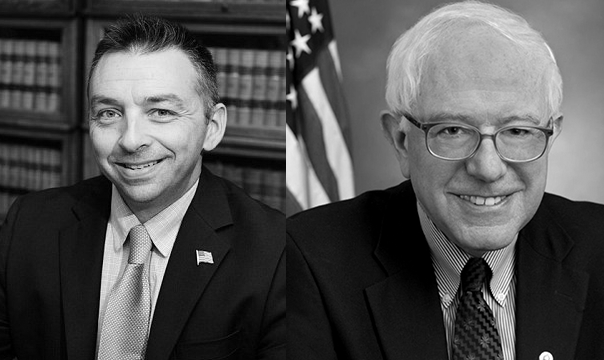 It’s been a weird year for politics, Save Jerseyans. But as much as some things change, others things definitely do not. At all.

Bernie is leading the Democrat field in New Hampshire and threatening Hillary Clinton in the other early states. The Left is fawning over him and treating the badly-worn and awkward New England socialist as some species sage for having regurgitated decades-old discredited ideas. “Incredibly charming” is just one of the many descriptions you’ll find on the liberal net.

Less charming? His 1972 essay for the Vermont Freeman on the subject of gang rape fantasies. “A man goes home and masturbates his typical fantasy. A woman on her knees, a woman tied up, a woman abused,” Sanders opined. “A woman enjoys intercourse with her man — as she fantasizes being raped by 3 men simultaneously.”

Yikes! Yet Democrat reactions have ranged from total disinterest to verbal shrugs.

At least New Jersey Assembly candidate Cappola was trying to be funny in his online published book Outrageous, a tome chock full of allegedly racist, misogynistic, homophobic, and objectively strange “satire.” But his youthful incident of presumably isolated idiocy ended in a resignation from the LD38 ticket reportedly at the prompting of GOP officials, not a liberal blogger story complimenting his “charming” novel, and the collapse of what should’ve been the GOP’s top 2015 target based on the 2013 results has reopened Republican wounded inside and outside of Bergen County.

The worst part: it was all so painfully avoidable. There isn’t a perfect person out there (saying “be smart” is easier said than done retroactively, right?), and with the media firmly lining up on the Democrat side of the aisle, Republican candidates will never be able to count on the kind of friendly cover that Senator Sanders enjoys. GOP candidates and campaigns can definitely make things worse for themselves by getting defensive when the best defense is almost invariably a good offense. LD18’s Synnove Bakke, a former Save Jersey contributor, responded to her own recent brush with the PC Police by squaring up and coming out firing. She’s better off for it, and Synn would do even more with it if our state had an opposition party with cash. Similarly, LD’1 Jim Sauro owned his factually correct comments about the state of race relations in America without blinking and came out of it OK; his opponents barely tried to touch it.

Cappola is trying to get back in the fight now, too, and reverse course with two weeks to go, but he never should’ve dropped in the first place.

Don’t believe me? Ask the Donald. I’m sure his reply will be worth the question. He’s going far by telling the media/academic establishment to piss off.

We’re already being badly outspent, a problem Trump doesn’t have. But there’s no excuse for being out-fought.

Relax. I’m not defending Anthony Cappola, or what he said, or the GOP vetting process. Not only do I not want to, but I also sure as hell shouldn’t have to. The Left never does it for their errant cast members.

What we should be able to agree on is the brutal fact that Republicans are never, ever, EVER going to start winning these hard races again unless we stop playing the other side’s games, by their rules, especially since the other side doesn’t follow their own rules. The rules weren’t designed to be fair to us. Why are we still expecting an equitable outcome, Save Jerseyans?

14 thoughts on “Cappola, Bernie, and the double-standard of stupid utterances”