Could Garrett pick the next speaker? 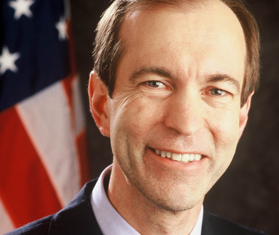 You may’ve missed this Saturday post from New Jersey Herald on North Jersey’s most high-profile conservative, Save Jerseyans, and his possible role ahead of Thursday’s vote to replace John Boehner. It’s worth a read.

Garrett is one of the nine founding members of the caucus. It was launched by hardline conservatives in January soon after a failed effort, backed by Garrett, to oust Boehner.

Garrett is the only caucus founder from the Northeast, which generally elects Republicans less conservative than elsewhere. The caucus does not disclose a roster, but several published reports place its membership at about 40.

The CNN report did not say whether Garrett attended the meeting with McCarthy. His office did not respond Friday to a request for comment.

Assuming members vote as a block, the caucus will have considerable influence on Thursday’s votes for speaker and majority leader.”

The full article is here.

Garrett, who is reportedly fully and totally undecided, is a bit of rebel having refused to donate to the NRSC over gay marriage and further refusing to back Boehner in his final successful reelection bid.

2 thoughts on “Could Garrett pick the next speaker?”