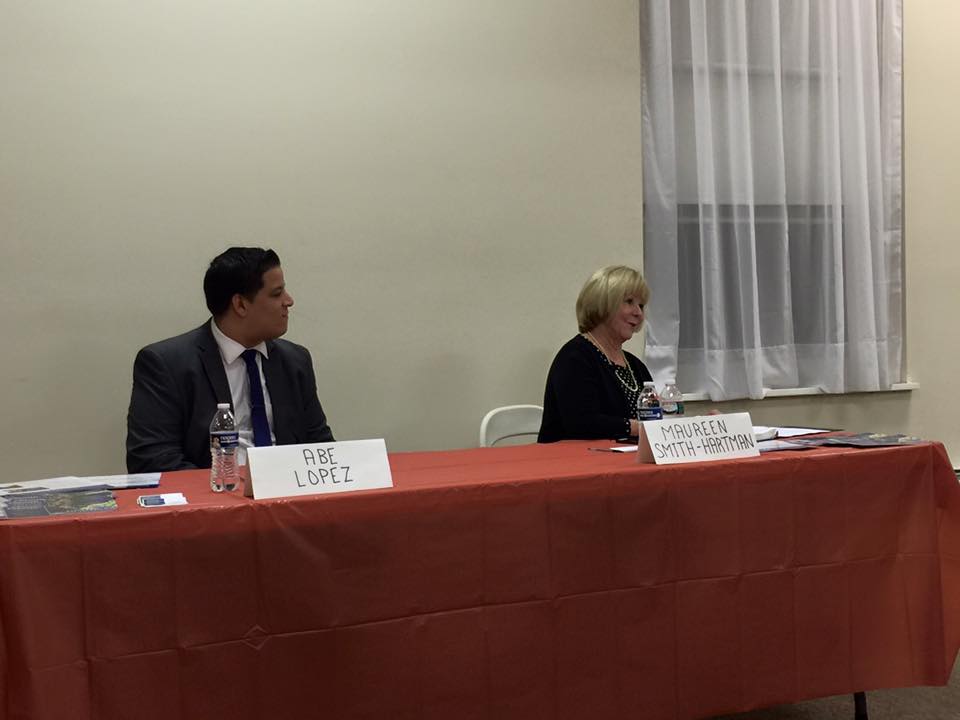 Refusing to debate is bad enough. Crapping out at the last minute? That’s taking it to a different level.

Westampton Democrats Robert Thorpe and Vernita Jones cancelled on the League Of Women Voters at the 11th hour on Wednesday evening ahead of a bruising finale to this year’s municipal race, no-showing at the Rancocas Civic Association and leaving residents in attendance scratching their heads.

“This move by their campaign is symptomatic of their political regimes overall lack of transparency and numbness to the concept of public service,” Republicans Abe Lopez and Maureen Smith-Hartman declared in a joint statement. “We would like everyone to know that we promise to take a different approach for a better Westampton. We want to serve our community and run an efficient, responsive local government.”

It’s been a brutal battle from day one in this traditionally blue town, one where Chris Christie narrowly won in 2013 but Barack Obama romped with 67.9% one year earlier, amped-up by the resignation of one incumbent Democrat candidate from the ticket; most recently, Mayor Carolyn Chang flipped out (no exaggeration) on her opponents at a public meeting. Republicans hope to capitalize on a favorable turnout model and a strong county-wide effort for the GOP ticket but, as always, Democrats fight a lot better than they govern.

Here’s a last-minute mailer designed to look like it came from the local fire department when, in fact, the truth behind this Big Labor piece is a little more complicated: 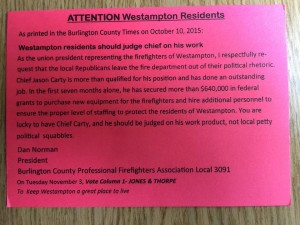 Public sector unions have stayed with the Dems this year by-and-large in Burlco whereas some private sector “building trades” unions are going Republican in part owing to the presence of Kate Gibbs, head of Business Development for the Engineers Labor-Employer Cooperative of Local 825, on the freeholder slate with former Navy SEAL Ryan Peters. The mailer reproduced above makes reference to this story, by the way, which suffice it to say for this post catalyzed the resigned Democrat candidate’s departure from the race.

Like I said… a lot happening in Burlington this cycle!

What’s more, while we’re on the subject of mailers, the GOP challengers have accused Thorpe and Jones of violating New Jersey campaign regulations by allegedly failing to provide proper “paid for” disclaimers on advertisements AND allegedly violating the “90-day rule” preventing incumbent candidates from spending tax dollars on public mailings touting themselves within 90-days of an election: 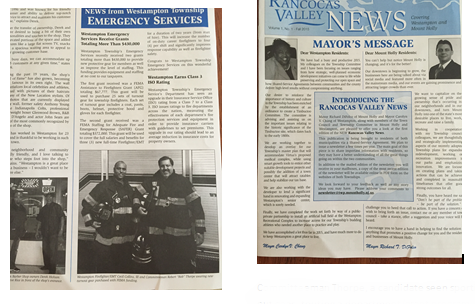 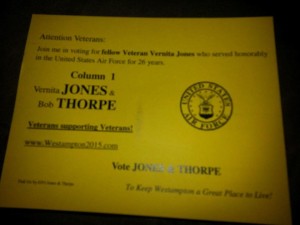 “It’s time for the authorities to step in and stop this,” added Lopez, responding to the mailings. “These laws were put in place for a reason. Someone must hold political campaigns accountable, or else they will have free reign to run exactly the kind of campaign that Thorpe, Jones and the Westampton political machine are running. They are hiding their campaign contributors, spending taxpayer money on their re-election campaign, and effectively ignoring campaign finance reporting requirements.  I am formally demanding the Election Law Enforcement step in here on behalf of the people of Westampton.”

Stay tuned for a big finish.