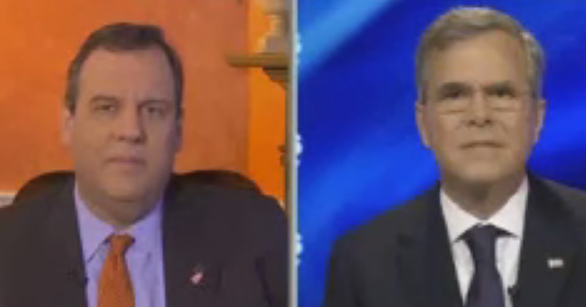 The NJ GOP establishment started out the 2016 cycle divided between these two men, Save Jerseyans, but things have changed a lot since this time last year. Almost comically so depending on your perspective…

Both Chris Christie and Jeb Bush kicked off the first actual week of 2016 on Fox News on Sunday morning discussing the status of their respective campaigns:

Christie balked at the host’s suggestion that New Hampshire could be a “win or out” proposition for the New Jerseyan.

“Absolutely not, Chris. I mean, listen, you said it yourself, in October we were in ninth place in New Hampshire. We’re now third or fourth, depending on what poll you look at. The fact is we just need to do well there, and we need to do well in Iowa, too, and I think we’ll do well in both places,” explained the Governor in his interview with Fox News Sunday Chris Wallace. “And then we’ll be able to move on, this field will be narrowed to four, five folks, I suspect, after New Hampshire. We’re going to be in that four or five and we’re going to be ready to compete around the country.”

As of December 20th (the date of the last released public poll), Christie sat in 4th place in the Granite State in the RCP average.

The next debate is scheduled for January 14th; Iowa’s caucuses take place on February 1st followed by the New Hampshire primary on February 9th.

Video from Jeb’s appearance is below the fold: