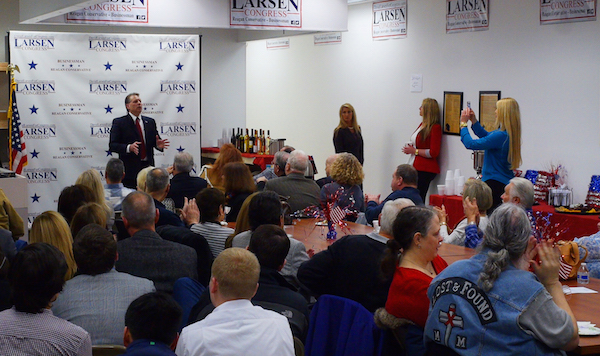 Approximately 100 supporters showed up for an open house at GOP primary challenger David Larsen‘s Green Brook headquarters on Saturday night, Save Jerseyans, and the message was as forceful as it was predictable:

Leonard Lance is a “RINO” (short for “Republican In Name Only”) who needs to be replaced.

“Informed people are fed up with liberals in the House like Lance, based on his voting record, he has embarrassing failing scores of only 43% from Conservative Review and another failing score of only 53% from the conservative Heritage Action, he desires to have more in common with Pelosi, Reed, Schumer and Bernie Sanders than he does with true conservatives like Garret, Brat or Jordan, so the time has come to retire him,” proclaimed Larsen, an activist who has challenged Lance every two years since 2010.

Not everyone agrees with Larsen’s bleak assessment of the incumbent’s voting record.

The Congressman hasn’t announced his own reelection campaign to date but is expected to announce soon; in the interim, he’s focused instead on well-attended town hall meetings. The next town hall, focusing on veterans’ issues, is scheduled for Cranford on January 28th.