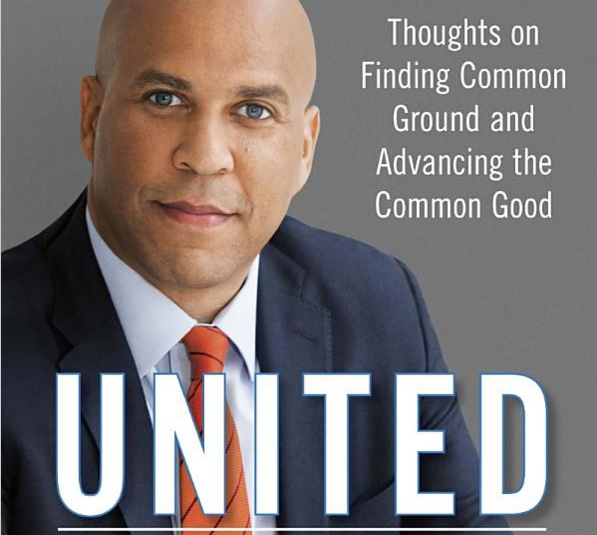 So the senator who thinks in 140 characters, Cory Booker (D-Twitter), finally dropped his first book in voters’ laps this week, Save Jerseyans. He’s running for vice president in case you didn’t figure it out already; your first clue should’ve been when he compared Hillary Clinton to George Washington last month. No, you can’t make this crap up…

In any event, Booker’s new book has the rather wordy title of “United: Thoughts on Finding Common Ground and Advancing the Common Good.”

Look: I’m sure I could spend days parsing all of the B.S. crammed into its 240 pages. Who has the time or the patience? Or the ability to sustain the necessary blood pressure spikes without keeling over?

Let’s protect our sanity and limit the discussion to a few quick yet significant observations:

(1) First of all, what has Cory Booker done to unite anyone?

Best I can tell (and I watch him as closely as anyone), outside of a few unfulfilled attempts at widely-popular (read: “safe”) criminal justice reform, he hasn’t accomplished or even taken on much of anything interesting to date. Nada. Nothing.

Senator Booker is also as liberal as Mayor Booker, the guy who screwed up Newark beyond even Sharpe James’s ability to do so before getting promoted (?) to federal office. He’s far to the Left on abortion, immigration, tax policy, Iran and every other important issue. Thus far, he’s racked up a lifetime rating of 2% from the ACU… 0.8% more liberal than Nancy Pelosi! And in the rare instance he HAS taken a stand against his party’s radical leadership, political pressure quickly convinced this ambitious Democrat to fall back in line.

(2) Then again, I can think of a one exception!

Any guesses? Newark’s Watershedgate scandal, currently the subject of a lawsuit, was so egregious that it brought together the unlikely bipartisan duo of state Senators Sam Thompson (R-Burlington, Middlesex, Monmouth, Ocean) and Ron Rice (D-Essex) to demand an investigation into the Booker-era tax dollar-financed fiasco. The Mayor’s involvement – or lack thereof – was stunning. Somehow I doubt it made the book…

(3) What’s more, the book’s most glaring omission isn’t very unifying-ish at all.

The theme of this book is working past honest disagreements. Curious then that Booker mentor Rabbi Shmuley Boteach, a popular media personality and former GOP congressional candidate, didn’t make it into the book. Why? Despite the pair’s relationship which Booker often described as formative in the past? Shmuley cites “strain” over his opposition to the Iran Deal backed by Booker. So much for being bigger than it all!

We’ve seen it all before here in New Jersey, folks. People want to believe in this guy. That doesn’t mean there’s anything in which to actually believe. My suggestion? Find something else to read over spring break.

45 thoughts on “What has Cory Booker done to ‘unite’ anyone?”