It’s a standoff, Save Jerseyans.

The first, EO-209, places millions of dollars in budget appropriations in fiscal reserve to counteract, as the Governor’s accompanying statement colorfully explained, the Democrat legislature continued to “thoughtlessly spend down the State’s surplus by $160 million.”

EO-210? A halt to ALL state road projects after Senate President Steve Sweeney’s chamber packed it in for the long holiday weekend without holding a transportation trust fund vote.

You can read the executive order’s text here.

“Senate Democrats are clearly conflicted over how to appease their public and private-sector union masters, because their union masters also are divided over the bipartisan tax fairness solution that passed the Assembly,” Christie said. “The Senate’s inaction ignored the benefits the package would bring to the overburdened taxpayers of New Jersey, who would benefit daily from the sales tax cut it would provide and the retirement income tax elimination for 81 percent of senior citizens. The Senate’s inaction also ignored New Jersey’s necessary transportation infrastructure improvements, as well as the hundreds of private-sector workers who came to Trenton today with their jobs hanging in the balance, because the Senate failed to re-authorize this Transportation Trust.”

The sales tax portion of Christie’s preferred Assembly package is nevertheless controversial for a number of reasons including the fact that it isn’t guaranteed and could easily be dispensed with before it benefits New Jerseyans when a new governor takes office in January 2018 (remember: the current 7 percent sales tax would drop to 6.5 percent on January 1st and then to 6 a year later, way out in 2018). 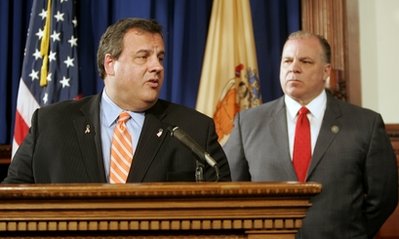 Unfazed by criticism, Christie’s executive order requires NJDOT to submit a list of projects – and how they’ll be shutdown – by the end of Saturday. Work will only resume (pending a TTF resolution) if a particular project is deemed essential to the public’s health, safety and welfare.

Officials may be waiting a little while before work resumes. Sweeney indicated no vote would occur over the 4th of July holiday weekend and Trenton insiders speculate a vote may be as far off as two weeks in the future.